Steyliff Grove is a dungeon in Final Fantasy XV that is only open at night. Its mystical ruins are related to the ancient civilization of Solheim. Through seemingly magical means, the ruins remain dry though they lie under the lake in the Vesperpool. Water represented death in Solheimian culture, and Solheimians paid tribute to the dead at the Vesperpool through the Steyliff Grove. The location is associated with paranormal activity to do with gravity, with parts of the ruins collapsing and repairing themselves. The circular platforms are warp pads that teleport the party outside if they touch them when the glow red. The interior of the dungeon is similar to that of Costlemark Tower.

Underneath the ruins is a 100-floor deep "menace dungeon" with high level monsters and plentiful treasure, which the player can access in post game as part of the Menace Beneath Lucis quest. Its depth makes it the longest menace dungeon.

Entrance of Steyliff, by the stairs on a pile of rubble.

Stone mausoleum built by the ancient people of Solheim, who saw fire as a sacred symbol of life. The people paid homage to their patron saint Ifrit at the Rock of Ravatogh, and recent academic studies suggest the people's devout faith was a driving force behind the advancement of their civilization.

If one were to hypothesize that water, in turn, symbolized death among the people of Solheim, then it stands to reason that they established their space for venerating the souls of the lost beside an enormous lake—the Vesperpool.

Those brave enough to enter the tomb have reported a wide variety of traps presumably laid to deter grave robbers. More interesting, however, is the design of the mausoleum interior itself: the emphasis on water and fluidity seem to support aforementioned theories about Solheim civilization's conception of life and death.

With the rains that fall upon the earth and nurture life
Also come the bolts of lightning, couriers of strife
Though man can't curb the fearsome whims that rule the natural world
Against a beast, the white flag of defeat needn't be unfurled

Looking to the Oracle for guidance in these trials
I realized we might defeat the menace with our wiles
First we draw the devil down and seal it in a cage
Then entrust its exorcism to the coming age
And 'til an heir arises to succeed the life she led
Her staff in hand, I shall become the Oracle in her stead

Steyliff Grove is a remnant of the ancient civilization of Solheim full of mystical phenomena. At some point, it became infested with daemons. A king of Lucis and an Oracle once set out to fell ferocious beasts that threatened their subjects. Once they reached the Vesperpool they discovered a flying monster who attacked them with lightning that killed the Oracle and sent the king fleeing. The king sealed the monster underground and took up the Oracle's position and trident until her rightful successor would be ready. The king left behind monoliths of this tale in the Steyliff Grove Menace dungeon, lamenting his love for her and calling himself the "coward king" who issued orders from the rear rather than valorously leading the attack like his forebears had done. This king may be the Oracle King whose statue defends Insomnia as part of the Old Wall.

Niflheim Empire studies Solheimian ruins to recreate their technologies and captures daemons to study and weaponize. When Prince Noctis and his retinue venture into the ruins to find mythril to repair King Regis's boat, Ardyn Izunia hires Commodore Aranea Highwind to assist the party. She informs them about the empire's ruin expeditions, though she feels ambivalent as she does not agree with using daemons for war. They find mythril at the end of the ruins, being guarded by a flying monster that uses lightning, quetzalcoatl. They slay the monster and acquire the mythril.

In Chapter 7 during the Party of Three quest, an imperial soldier outside Steyliff Grove sells items to the party. The shop is around only for this portion of the game; otherwise, the Vesperpool region only has tackle shops. The item shop inventory is the same as the one at House of Hexes.

In Chapter 7 during the Party of Three quest, an imperial soldier outside Steyliff Grove sells weapons and accessories to the party. The shop is around only for this portion of the game. The weapon selection is the same as what is on sale at Verinas Mart - Ravatogh.

The menace dungeon portion has its own set of treasures (see below).

Parts of the ruins collapse and restore themselves, blocking and opening ways to treasures. Aranea accompanies Noctis, Ignis and Prompto as a guest. She cannot die, but can rescue party members who are in Danger and use her own Technique at Noctis's urging.

After descending the stairs, the player can exit to the left in the first room that has a circular pad near the wall, which is marked on the map if the player stands on it. Its purpose is mysterious, but may be related to the mechanism that restores debris from the dungeon allowing the player to retrieve several decent loot items. In the second room, the party is attacked by skeletons. The small room to the east has a Megalixir, but the ceiling will collapse upon it if the player approaches it, burying it and preventing the player from getting it. The player will need to come back for it after felling an iron giant deeper inside the dungeon. The other small room contains a Chrome Bit.

The player can head west into the corridor. The path north is blocked by debris, but if the debris flies out of the way, it will lead to a Phoenix Down, an elevator, and a chamber with a lich and a Sapphire Bracelet (Map). When the debris is removed later on after felling an iron giant, the player can also get the Megalixir from the previous room without the ceiling collapsing upon it.

Continuing on, the party will emerge onto a large open room that appears to be underwater. There is a Rusted Bit on the left (southwest side) and a Magic Flask on the balcony. On the platform, the party is attacked by crème brûlées and skeletons. Descending the stairs at the end and following along the path down another set of stairs, leads to more crème brûlées on the balcony.

Advancing, the party finds precarious walkways where the path crumbles, and they fall to the floor below to fight skeletons, reapers, and more crème brûlées; there are stairs, however, that lead back up to the upper floor. Heading for the western end pits the party against an iron giant. After felling it, the party can take the stairs behind the door in the northeast corner. The items in this area can be collected after the iron giant has been defeated, as the walkways restore themselves and no longer collapse. The far north room has a Mythril Shaft. The items beyond the restored walkways are a Rare Coin, a Hi-Elixir, and a treasure that has three possible outcomes: Heliodor Bracelet (25%), Ether (25%), or Elixir (50%). There is also a Mega Phoenix to the far south on the lower level.

The player can now backtrack to the first part of the dungeon to collect the Megalixir from the small side room near the beginning, and the Phoenix Down behind the debris on the path that leads north when the debris is lifted. The elevator there leads to a room with the Sapphire Bracelet but there is another iron giant and two liches.

Following the path finds a series of four hallways with warp pads at the ends and small side rooms filled with enemies. These will be used for a daemonwall hunt available later in the game. When the warp pads activate, touching them teleports the party outside the dungeon, but they are not active during the party's foray to find mythril. The enemies that spawn here are the same as before with the addition of a lich or two. One of the rooms in the north has a treasure that can be one of three items: Knight's Anklet (25%), Phoenix Down (25%), Elixir (50%). There is also a Talisman in a room to the west.

Descending the stairs at the end finds a room with elemental deposits. There is an Oracle Ascension Coin in the east dead-end. The next room has the boss, quetzalcoatl, and the mythril. After killing the boss and getting the mythril, the game prompts the player to leave automatically, but refusing lets one procure Allural Shallot from the room (a valuable ingredient) and find the sealed door at the back, although the player can't open it yet (see below). The player can then choose to exit the dungeon from the menu.

Although the hunts are available "at all times" the dungeon doors only open at night.

The side rooms between the main halls can be cleared of daemons before engaging the daemonwall so the player can escape into them every time the wall pushes the party to the end of a hall. This quadruples the available time to beat it since the player can fight it through four halls. The party will not automatically use the side rooms; the player must head there when the daemonwall approaches that section of the hallway. The door in the second hall is much closer to where the wall starts, so the player must be careful to not be pushed pastne it.

A Menace Sleeps in Steyliff[]

In Chapter 15, the player can do the Menace Beneath Lucis sidequests after completing the following optional dungeons: Costlemark Tower, Crestholm Channels, Balouve Mines and Daurell Caverns. At Meldacio Hunter HQ Ezma Auburnbrie will provide the Sealbreaker's Key to open the sealed doors. The recommended level for this dungeon is 86. The Windows and Royal Editions add monoliths to the dungeons, which the player can read to fill out their Datalog and get further lore information.

The sealed door is located in the deepest part of the dungeon, beyond where the boss was fought in the open room with the "water ceiling." Steyliff Grove Menace Dungeon is the longest of them all with 100 floors. Unlike most Menace Dungeons, Steyliff's maze consists of rooms in the style of the Solheimian ruins above, rather than caverns. Most enemies here are weak to daggers, though the psychomancers are weak to greatswords instead; the Zwill Crossblade from Randolph's quests, and the Plumes of the Vortex from the Adventurer from Another World, thus make for good weapons to equip here. The player should also have some magic, as the flan fought in the later floors are invulnerable to physical attacks. There are also tonberries in the later floors, which can take a long time to kill for their massive HP. The end boss is mictlantecihuatl, a tougher version of the regular boss fought at Steyliff as part of the story.

If the player goes to the dungeon entrance before talking to Ardyn, an imperial tank blocks the entrance. If the player uses a glitch to open the way to the Vesperpool before it is meant to be visited as part of the story, they will be trapped in Steyliff Grove if they kill quetzalcoatl too early. The Mythril Ore will not appear, so the party can't leave the room. 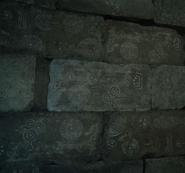 Symbols on the walls.