A Step is a category of abilities in Final Fantasy XI for Dancers. Steps are offensive in nature and inflict negative effects on enemies. The Step ability can be used once every 15 seconds. Successfully performing a Step will grant the Dancer two Finishing Moves or anyone using it as a Support Job one finishing move.

Quickstep is the first step learned by a Dancer upon gaining level 20. Quickstep will inflict a Lethargic Daze status. There are 5 levels of Lethargic Daze. Level 1 will grant a -10 Evasion penalty with each subsequent level adding -5. It costs 100 TP to use Quickstep and the probability it will land is based on physical Accuracy.

Box Step is a step learned at level 30. Box Step will inflict a Sluggish Daze status that lowers Defense. The probability it will land is based on physical Accuracy. It costs 100 TP to use.

Stutter Step is a step learned at level 40. Stutter Step will inflict a daze status that lowers Magical Resistance. The probability it will land is based on physical Accuracy. It costs 100 TP to use. It is believed that the first level of Stutter Step will give -10% Magical Defense, with each subsequent level up to level 5, an additional -5% is added.

Feather Step is the final step learned at level 83. Feather Step will inflict a daze status that lowers a target's critical hit evasion. If successful, it will earn the Dancer a finishing move. It costs 100 TP to use. 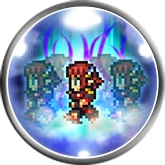 This section about an ability in Final Fantasy Record Keeper is empty or needs to be expanded. You can help the Final Fantasy Wiki by expanding it.
Final Fantasy XI abilities
Community content is available under CC-BY-SA unless otherwise noted.