You can see the light, right? So can I.

Stella to Noctis in the 2011 trailer

Stella Nox Fleuret (ステラ・ノックス・フルーレ, Sutera Nokkusu Furūre?) was a character that appeared in promotional material for Final Fantasy Versus XIII before it was reworked into Final Fantasy XV. Her design was reworked into the character Lunafreya Nox Fleuret, who serves a different role in the story than was planned for Stella. Rather than disappoint users by including a Stella that didn't match what they expected from the early reveal trailers, the developers went with a different character altogether. This way, they could also focus on creating a character that's their own.[1]

Don't worry about me. Live your own life.

Stella had long blond hair with side-swept bangs, round pale blue eyes with purple aspects around the iris (which, at one point in development, became purple irises outright) and wore small silver star earrings. Her regular outfit consisted of black top, skirt, and belt, and a white sleeveless bolero. Her party outfit consisted of a white sleeveless top and a long skirt, complimented with white shoes.

She had an honest and polite attitude, but was assertive and true to her beliefs due to her upbringing. As demonstrated in the Tokyo Game Show footage, she was direct and did not shy away from her problems, as opposed to Noctis, who is more reserved. According to character designer and director for Final Fantasy Versus XIII Tetsuya Nomura, Stella would "stand out" in some way from the other female characters in the series.

Like Noctis, Stella could materialize weapons from thin air, as she summoned her rapier from a rune similar to one used by Noctis to summon his sword, though Stella's rune was golden while Noctis's was blue.

Stella would have met Noctis at the signing ceremony between Lucis and Niflheim, where a great deal of their connection would have been revealed.[3] Stella was a member of the wealthy Fleuret family and resided in the land of Tenebrae. After a near-death experience early in her life, similar to Noctis, Stella could see the light from the Kingdom of the Dead, which granted her special powers. She was shown to reluctantly fight Noctis in an early trailer, wielding powers similar to his to forge weapons from thin air. Gentiana's original role for Final Fantasy Versus XIII was that of Stella's messenger, and a contact point between the countries of Tenebrae and Niflheim.[4]

Stella's appearance underwent changes since she was first unveiled. Tetsuya Nomura has commented there being no specific reason he redesigned her look, other than wanting to make her prettier. When Nomura created Stella back in 2007, he actually created something that was not his type of character, but overtime he grew fond of her.[5] Stella initially had long, layered blond hair with a side-swept bang. In the trailer shown at the DKS3713 event, Stella wore silver stud earrings, an open short-sleeved white cardigan over a black corset-like top with a frilled black skirt and black knee-high boots.

Creative director of Roen and clothing designer for Final Fantasy XV, Hiromu Takahara, designed the cocktail dress and ankle boots worn by Stella during her conversation with Noctis. Hiromu Takahara originally wanted her dress to be black, but the production team changed the color to create a greater contrast with the black suit Noctis wears in the same scene.

Stella still appears in the Final Fantasy XV E3 2013 trailer, albeit not in detail: her back is glimpsed as a child, and she appears in the character roster in the end of the trailer. Stella's CG render that appears in the roster was redesigned from how she appeared in earlier Versus XIII trailers, but this "new" Stella never appeared again after this trailer.

After Final Fantasy Versus XIII was rebranded Final Fantasy XV the team had to decide which elements to keep from the original story to ensure a coherent story for a single game. The team had wanted to keep Stella and pursued ways to tie her into Final Fantasy XV but struggled to make sense of her character and role within the new game. After a lot of consideration, the team decided not to include Stella and go with a new character named Luna, who has a different role in the story.[6] Developers felt uncomfortable working on a well-known character if they had to completely change their role, and this is why they decided to change the character.[7]

The original opening scene where Stella meets Noctis was re-imagined for Kingsglaive: Final Fantasy XV at the scene where Lunafreya meets Nyx Ulric at Caelum Via hotel rooftop.

Insomnia has a billboard with a woman who looks a lot like Stella's portrait in the Final Fantasy XV E3 2013 trailer. The billboard appears in both Kingsglaive and Chapter 14 of the main game.

Kingdom Hearts III has a trailer for a fictional game called Verum Rex that shows a woman that resembles Stella, who also wears a star necklace. In the fictional trailer, the woman has dark hair and the male protagonist silver hair, the reverse of the Noctis-Stella pairing from Versus. It appears as a commercial in Kingdom Hearts III, when the player first goes to the Toy Box.

In the Spanish version of Final Fantasy XV, the Star Pendant is named "Colgante de Stella" (Stella's Pendant). The item's description says that it may have belonged to a heroine who was ostracized a long time ago. 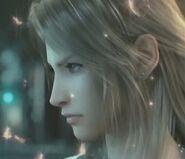 Stella in a metropolis.

[view · edit · purge]Stella is Latin and Italian for "star".

[view · edit · purge]Fleuret is the French name for a light fencing foil or small sword. In English it is an ornament resembling a small flower.