Relm: I couldn't miss the chance to practice my drawing!
This article is in need of a few pictures. Perhaps you can help by uploading a picture of Screenshot of characters and enemies under various statuses at once in each game, if possible. These would also go on each individual List of page too..

Status effects (状態異常, Joutai Ijou?, lit. Abnormal State) appear prominently in the Final Fantasy series. These conditions affect a character's attributes or actions either positively or negatively. Some status ailments can be side effects of attacks, while others might be their own spell or skill. They can affect either one or multiple characters.

Add Status is a means of inflicting status ailments on enemies with normal attacks, that appears in many Final Fantasy games.

In Final Fantasy XIII, most status ailments are divided into two categories: Debuffs, which hinder the target's stats (Deprotect, Deshell, Imperil, Poison), and Debilitations, which hinder the target's ability to act (Slow, Curse, Pain, Fog, Daze). Up to eight total status effects of either polarity (five in Lightning Returns: Final Fantasy XIII) can exist on something at once (the oldest one will be canceled), and several (such as Protect and Deprotect) will dispel each other. Status effects with hexagonal icons can't be removed naturally.

The party under various statuses in Final Fantasy VI, including Doom, Confuse, Haste, and Shell. 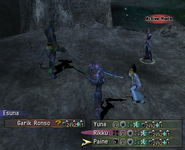