Statue of the Gods

The Statue of the Gods (神々の像, Kamigami no Zō?) is a series of bosses in Final Fantasy VI. Its name comes from the Final Fantasy 25th Memorial Ultimania, and it is labeled as such internally in the Pixel Remaster release. The bosses are fought during the final battle in the form of a gauntlet where the party has to survive each battle sequence before they can face Kefka. The party members who fail to survive after all enemies in a tier have been defeated are removed from the active party before facing the next tier, and are replaced by the next characters in sequence.

The game will ask the player to organize their twelve characters according to whom they want in their active party throughout the battles. They will start with the first four characters, and each time someone is left KO'd before moving on to the next tier, they'll be replaced by the next character on the list. Once all twelve characters are used up, or if all four characters are defeated before the tier ends, the game is over. The gauntlet can be long, and there is no interval in-between the tiers. The player will not be able to change equipment, make changes to their equipped espers, or rest up during the gauntlet.

The player should prepare accordingly by organizing the party order to best accommodate their strengths and weaknesses. When the character order is confirmed, the gauntlet will begin. The Statue of the Gods is separated into three tiers, each composed of multiple enemies.

Uniquely, the creatures in the Statue of the Gods are depicted as part of the background, rather than as sprites on the battle field. They thus do not disappear when defeated, their names are not shown, and any attacks that alter the background will alter the Statue as well. In a technical sense, the various parts of the Statue do have sprites, but they all reuse the Brachiosaur sprite, set to be hidden from view.

The dummy version of Kefka's AI script implies that the enemy was a device used to help switch the tiers in the final battle. However, since the enemy does not actually appear in the final battle, it is dummied. This concept is used during the battle against him in Final Fantasy XIV, however.

According to the Final Fantasy III Nintendo Player's Guide, the final battle is supposed to be a rematch of the Statues, the first tier being Poltrgeist, the second tier being against Goddess, and the third tier being against Doom.[1] According to the Final Fantasy III Players Guide, the three-sectioned vast, distorted creature is an organic version of Kefka's Tower.[2] These theories are not supported by official material; the ideas were created by their authors.

The artwork for the Statue of the Gods shows many of them wearing capes and sashes similar to Kefka's god form. The positioning of Rest and Lady is based on Michelangelo's Pietà, a sculpture of Jesus lying in Mary's lap after being crucified. Lady's Japanese name is Maria, another name for the Virgin Mother.

A common fan interpretation of the Statue of the Gods is that they symbolize the Divine Comedy, an epic poem in which the author Dante Alighieri travels through the stages of the afterlife, Hell, Purgatory, and Heaven. In the Divine Comedy, Hell is where Satan is a demon entrapped up to the waist, Purgatory is a place of suffering and spiritual growth, and Heaven is where Dante meets famous saints. This is reflected by Visage in the first tier, Tiger, Magic, Power and Machine in the second tier, and Rest and Lady in the third tier. After traversing through Heaven Dante meets God, who explains to him the meaning of life. This is reflected in Kefka, who has become the God of Magic and tells the Returners that life is meaningless.

Much of the tower is mechanical with steam vents, cabling and metal woven into the adversaries' organic appearances (minus Machine). This could allude to the structure being made from the same power that built Kefka's Tower, or the industrial power of the Gestahlian Empire that both created Kefka and which he destroyed.

The Statue of the Gods appears during the battle against Kefka in Omega: Sigmascape V4.0. Kefka is fought on a platform that pivots around and up the Statue, as several attacks emanate from the Statue rather than Kefka himself. 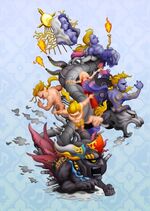 The Tower of Gods in the North American SNES version.

The Tower of Gods in the original Japanese version and English release of the PlayStation version.

The Tower of Gods in the Advance version.