Stare (にらみ, Nirami?, lit. Glare) is a recurring ability in the series, usually being an enemy ability, and oftentimes inflicts non-elemental damage with some status effect, usually being Confuse or Sleep. It often comes in different varieties as well, namely those that inflicts statuses.

Stare is an enemy ability used by the Evil Eye, and merely inflicts minor non-elemental damage to one party member.

Stare is an enemy ability used by Stalagmite and Rust Bird, which can inflict Petrify on one target.

Stare Down is an enemy ability used by Twin Brain and Chekhov, which inflicts Paralyzed on a party member. Stone Stare, used by Gagighandi, inflicts Slow-numb on a character.

Stare is used by the Vysage and inflicts non-elemental damage to one party member, as well as Blind, Poison, Silence and Confusion statuses. Another ability, called Petrify Stare, is used by the Glacial Eye and Cockatrice enemies, and inflicts Petrify to the target.

Black Stare, used only by One-Eye, inflicts major non-elemental damage and Curse to one party member, while Cold Stare, used by Jormungand, inflicts Petrify to a target regardless of guards.

Cold Stare is a gaze attack used by the Dhalmel family, which silences any players affected by it.

Stare is a Blue Magic skill learned from the Floateye enemy. Stare inflicts Confuse in a T-shaped area two spaces directly in front of the caster with 100% accuracy if the targets are facing the caster. Otherwise, it automatically fails. It costs 12 MP to cast.

Stare is an enemy ability used by the Minotaur Zombie, Red Cap, Snow Crab, and Stone Golem. It inflicts Confusion.

Para-Stare is used by Dark King and inflicts non-elemental damage as well as Paralyze. 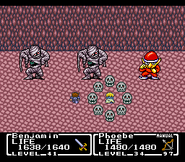