Sand that sparkles like the night sky. Many scholars insist it is not of this world.

Stardust (星の砂, Hoshi no Suna?) is a recurring item in the series, and is usually associated with casting the Time Magic spell Comet.

Sand with the same effect as Comet

Stardust appeared in most versions of Final Fantasy IV, but was, like most attack items, removed from the original English-language SNES version.

This section about an item in Final Fantasy IV: The After Years is empty or needs to be expanded. You can help the Final Fantasy Wiki by expanding it.

Uses "Comet2" on all opponents

A fine dust that glitters like stars in the night sky. Some natural philosophers believe the dust to have actually blown down to us from the stars themselves.

Stardust is a piece of loot that sells for 1,505 gil. It can be stolen from Spee and poached from Wyrdhare. Selling two Stardusts yields a Pheasant Netsuke at the Bazaar, an accessory that doubles the potency of healing items and elemental fangs.

Stardust is a low-ranked Glittering Dust that can be scavenged from on Tswarra, Isle of the Lost or bought at the Sky Saloon in Chapter 8 for 3887 gil (10% discount). It can be used to craft Fumarole, Eruptor, Stoneblade, Holy Lance, and Tumulus.

Summons a group of meteors wandering the galaxy to rain down on the designated target.

Stardust applies comet effect to the target. It can be bought for 2000 pg, found in Starkfort and Eternian Central Command, and dropped from Praline (ch 3, 5, 6, 7). 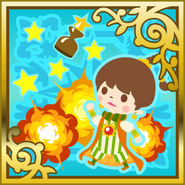 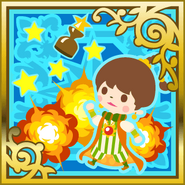 [view · edit · purge]Stardust is a type of cosmic dust composed of particles in space. Cosmic dusts are miniature particles, which resemble dust itself. When cosmic dusts form a cloud in space, any light from stars will be refracted and nebulae will be formed. Although called "dust", stardust can refract more light depending on its size due to its refractory minerals.

Items
Community content is available under CC-BY-SA unless otherwise noted.