A sweet little canine character beloved by the citizens of Midgar. A regular fixture in cartoons and movies, his face is on every corner of the city either in toy or poster form. Originally used as propaganda material during wartime.

Stamp is a mascot used by the Shinra Electric Power Company in Final Fantasy VII Remake. He is a jovial and helpful hound, whose theme can be collected to be played on the jukeboxes.

Stamp is a cartoon hound who wears a World War I-style green helmet with stars on. He is a mascot whom Shinra has adopted for propaganda purposes and who appears on Shinra's recruitment posters for the Shinra Public Security Division. He is also a popular character in various types of media, specially among children. The Leaf House's teachers at the Sector 5 Slums wear aprons depicting the dog, while a child mentions looking forward to seeing the next installment of Stamp's adventures. Signs and billboards in the Wall Market area advertises a film depicting Stamp riding atop a camel, called "Stamp and the Hidden Treasure". Stamp also has his own brand of potato chips, which Wedge is often seen eating.

During Chapter 5, "Dogged Pursuit", Avalanche member Finn has spray-painted pictures of Stamp with his nose pointing the right way to Mako Reactor 5 to help Barret, Tifa, and Cloud find their way during "Plan E" of the bombing mission, presumably because graffiti of a Shinra propaganda symbol is less likely to be removed than other vandalism before the critical hour. Barret resents that Shinra has repurposed a friendly mascot like Stamp for nefarious means. While in the Sector 4 train tunnels, the player can find a vending machine selling Stamp's theme. Other Stamp-related graffiti can also be seen around the slums, and the teachers at the Leaf House school in Sector 5 Slums have Stamp on their aprons.

Barret sometimes needles Cloud by referring to him as "Stamp" and suggesting that he is still Shinra's loyal dog.

During the vision to Zack Fair's confrontation with the Shinra Army, a flyer of Stamp whizzes by the area, carried by the wind, but it depicts Stamp as a terrier rather than as a hound.

Various graffitis of Stamp can be seen through the Sector 7 Slums, and one graffiti in particular, drawn on a wall of Abandoned Talagger Factory, shows the location of a treasure hidden behind destroyable boxes: the Fort Condoer's Monodrive (Ranged) unit.

During the Old Snapper's discovery quest, "The Happy Turtle Ad Campaign", a pair of cats can be seen playing with a magazine entitled "Entertainment In Focus", which depicts Stamp in the cover and the back.

In the Sector 7 slums, a woman is telling a story to children that depicts the adventures of Stamp.

"Bow wow! I am Stamp, the good boy who never stops helping!"
"Cap'n's given me a very important mission: to buy bread for tonight's dinner!"
So with his super-duper nose, Stamp went into town to sniff out a bakery.
He went sniff-sniff here, and a sniff-sniff there!
Even finding milk, sausage, and cake didn't distract him.
Using is trusty nose, Stamp was able to find the best, most yummiest bakery in the whole city!
And from that bakery, he picked out the best, most yummiest-smelling loaf of bread!
Thinking about how pleased the captain would be, Stamp went trotting back to base, wagging his tail, and singing a happy song.
But on the road home, he came across a moogle crying all by himself.
"What's wrong?" Stamp asked the little fellow.
"I'm so hungry, I haven't eaten in ages, kupo," the moogle sniffled.
"Never fear, Stamp's here! And I just know how to help."
So Stamp gave the crying moogle his loaf of bread.
"Thank you, kupo," the moogle exclaimed, his pom bouncing excitedly.
Then Stamp waved goodbye and returned to base.
When he got there, he went straight to the captain and told him what had happened.
The captain was very proud of Stamp. Helping that moogle was the right thing to do.
"Who's a good boy," the captain laughed, as he gave Stamp a good scratch behind the ears.
And Stamp let out a happy bark, for he knew that he was the good boy.

Stamp's theme, called simply "Stamp", is a music disc bought from a vending machine in the Sector 4 train tunnels for 50 gil. It is included on the eighth disc of Final Fantasy VII Remake Original Soundtrack. It was composed by Mitsuto Suzuki & Nozomi Toki, arranged by Mitsuto Suzuki & Naoyuki Honzawa, and the lyrics are by Motomu Toriyama. The lyrics were translated into English by Ben Sabin and John Crow.

Stamp was planned from the early development. Co-Director Motomu Toriyama has noted that in the ending, when a surprising character makes an appearance, Stamp's dog breed is different.[1] Stamp elsewhere in the game looks like a hound, but briefly during a scene he looks more like a terrier.

When finalizing the story for the remake the team decided to use Stamp as a mascot, a popular character everybody knows and Avalanche uses to send secret messages. Director Tetsuya Nomura was in charge of the design of the Stamp Avalanche uses. Though he normally wouldn't go this far, he felt he would become an important character, and so drew his character sheet himself.[2]

Although generally indicative of the use of mascots for propaganda purposes in real life, a similar theme can be found through the historic use of Disney and Dr. Seuss characters in American World War II propaganda, and the Donald Duck inspired enemy Mad Mallard in the Mana and Final Fantasy Adventure series. 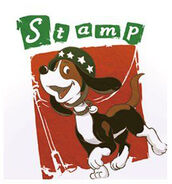 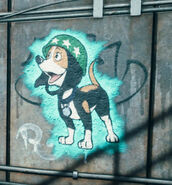 Stamp graffiti in the sewers.

Sign on Wall Marketing depicting the film "Stamp and the Hidden Treasure".

Billboard on Wall Marketing depicting the film "Stamp and the Hidden Treasure".

Stamp depicted in the magazine "Entertainment in Focus".