Squidraken (スクイドラーケン, Sukuidorāken?), also known as Drakan and Squidlarkin, is a recurring enemy in the series.

Squidraken is an enemy fought at Whisperwind Cove, exclusive to the Game Boy Advance and later releases. It is less dangerous than the Mindflayer, but can still utilize the Mind Blast ability. It can drop the Sage's Staff upon defeat. 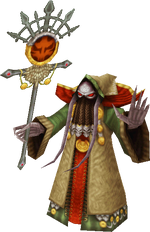 Drakan is an enemy fought at Desert Palace. It fights using various status spells such as Mind Blast, Freeze, and Mustard Bomb, in addition to buffs such as Reflect and Vanish. Having Quina use Eat on a Drakan will allow them to learn Vanish from it.

Squidraken is a stronger version of the Piscodaemon, being able to utilize the Dischord ability to dispel buffs on a target. When poached, they can yield the valuable Sleep Blade.

Squidraken is an enemy fought at the Bard's Challenge Dungeon, exclusive to the original phone release and thus making it a dummied enemy in future releases. It battles using Mind Blast and Bio, and when defeated has a chance to drop the Prism Rod.

Squidraken is an enemy and playable Mirage. 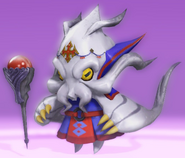 This gallery is incomplete and requires Pictlogica Final Fantasy [FFIX] added. You can help the Final Fantasy Wiki by uploading images.

Squidraken is a portmanteau of "squid" and "kraken".