A SeeD cadet training to be a mercenary at Balamb Garden. He was a lone wolf, who shunned away others, until his encounter with Rinoa helped him gradually open up and ultimately embark on a journey to defeat the evil sorceress.

Squall is a playable character in Dissidia Final Fantasy Opera Omnia who can be recruited during the Lost Chapter A Lion's Heart.

Squall wears a black leather bomber jacket over a white deep v-neck t-shirt that parts down the middle of his chest, black pants, and white fur trimming along the collar and top of his pants. He wears a Griever pendant and has a Griever belt buckle. A sash partially covers his right leg.

His alternate costume, SeeD Uniform, is (as the name says) the military-style SeeD uniform ( 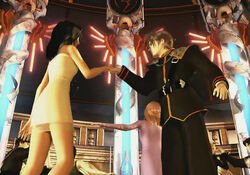 ) he wore in Final Fantasy VIII during his graduation ceremony. It consists of a black jacket with gold trim fastened by a belt, black pants and knee-high black boots. The jacket's cuffs are red with silver shoulders connected by a chain across the chest.

Squall's personality remains the same in his original incarnation: introverted lone-wolf type. When Seifer betrays Raijin and Fujin to become Ultimecia's guardian, Squall suggests them to join the team. When the party encounters Rinoa, Squall shows joy and expresses that he was concerned about her after arriving to the Torsions World.

Shortly after entering the new world, Squall was recruited by Edgar to investigate for the Returners. The party encounters him while traveling through a series of caverns to investigate a local Torsion. Though he is aware of what they are doing, he brushes off their concerns and continues on his own.

The party, concerned for his safety, follows. Squall argues with them, calling them amateurs and warning them to leave as the caves are dangerous. Cloud and Rem protest that they are soldiers like him and that they are fighting because they want to protect their friends and homeworlds. Squall remains skeptical and points out that they're all risking their lives based solely on Mog's claims, but refuses to answer questions about his client beyond the job he hired Squall for. Cloud nods and suggests everyone continue on. Squall finally hesitates, as the monsters beyond are too dangerous, and agrees to assist them while they're there.

He is unsettled by Y'shtola, who teases him by finishing his sentences and seems to have insight into his private fear of losing others, which reminds him of Rinoa. Later, Hope stops him to talk about Mog and whether sealing the Torsions will really protect the world. Squall doesn't have the answers Hope is looking for, but admits he's just trying to survive long enough to see his friends again.

Because his recruitment event was initially optional, Squall does not appear in the main story until Chapter 8, where several flashback scenes show him interacting with the others in earlier chapters. Seifer is aggravated when Squall arrives after a fight in Imber Manor, offended that Squall hadn't bothered to make his presence known back in the Lost Kingdom.

With the aid of Vayne, the warriors learn of Sephiroth's plot to become god of the world of respite. They defeat him and restore Materia to her rightful place as god on her throne. Afterwards, they return to the ruins of a city resembling Insomnia where their final battle with Sephiroth took place, and they continue to explore. Noctis pulls Squall aside, as well as Ignis, Prompto, Balthier, and Rinoa, and tries to decipher Vayne's intentions. Squall and the others speculate that in Vayne's ambition for power over all of Archadia, he lacked Noctis' strong bonds of friendship and that he might see some aspect of the person he instead wished to be when he sees Noctis.