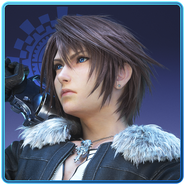 Squall alongside the other 14 main characters.