Squall Leonhart is one of the heroes fighting for the side of Cosmos in Dissidia Final Fantasy. A cold taciturn youth who wields a Gunblade--a weapon that is part sword and part gun. He is a master of combos, able to chain together a myriad of attacks with ease. In the original game, he was raised as a mercenary at the Balamb Garden Military Academy, and belonged to the elite force named SeeD. After meeting Rinoa, a member of the resistance, Squall's life changed forever.

Armed with a specially designed gunblade; the Revolver, he is a loner who prefers his own company, although he later joins Zidane and Bartz. Throughout his story he is focused solely on his duty to find the crystals and defeat his enemy, the time witch, Ultimecia. 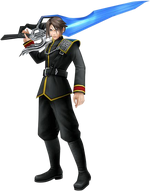 Squall's primary attire is based on both his original appearance from Final Fantasy VIII and his Amano artwork. He wears a black leather bomber jacket that is cut just below the rib cage with a white furred 'mane' along the collar. Underneath the jacket is a white shirt with a v-neck cut and black pattern that remains untucked. The Griever necklace and pendant hangs around his neck. Along with the jacket are black pants held by three belts, one of which has a Griever buckle. Over the right hip is a black protective sash and along both hips are fur ruffles that originate from the belt. Black gloves and black boots complete the ensemble.

His secondary attire is the male SeeD uniform from Final Fantasy VIII. Military in design the uniform possesses a standing collar buttoning down from top-to-bottom. The collar is part of a black tunic with gold trim and maroon cuffs. Pants are straight leg and tucked into black knee-high boots. A black Sam Browne belt is worn with the tunic and a blue and silver designed shield is worn over the shoulders, connected via a chain across the front. The shield tapers to a double point at the back. Squall's crystal version is of his primary attire in a pinkish maroon hue.

His crystal is a unique silver crystal that looks like a Draw Point from Final Fantasy VIII, which are sources of magic in Squall's world. Its design also hosts a shape of the Gunblade when carefully looked at.

After meeting Zidane and Bartz, Squall is offered a chance to join with them in finding the crystals but he refuses, citing that he feels more comfortable alone. Zidane and Bartz accept this and turn to leave but then Bartz turns back around and forcefully gives Squall a lucky feather saying that it will protect him from danger and that they'll meet again. Puzzled as to why Bartz had given him the feather Squall is met by Cosmos, who is actually Ultimecia in disguise. She questions Squall's decision of working alone where Squall simply shrugs it off, saying that it was the way of things. Cosmos/Ultimecia then hints that, to get the crystal, Squall must defeat Ultimecia alone. Squall accepts this as he continues on his journey.

While Ultimecia and Garland plot in the background Squall starts to question his own decisions at going it alone due to Cosmos/Ultimecia's previous questioning. Later still Kefka convinces Kuja to capture Squall in order to further his own plans to catch Zidane, knowingly going against Ultimecia's wishes. However, Squall defeats Kuja and becomes aware of his plans against Zidane in the process. Although he briefly considers trying to contact him he realizes that there is nothing he can currently do about it and continues on his quest.

As all the heroes, and villians, begin to group together Squall is the only one still working alone. Noticing this, the Warrior of Light intercedes, warning Squall of the dangers of working alone, then, when he still refuses to ally with a group, challenges Squall to prove his conviction. Squall defeats him and says that working in a group is not the only way to work together. The Warrior of Light accepts this and leaves, reminding Squall that he is not alone in the war.

Cosmos/Ultimecia appears before Squall once again near the end of his journey. Revealing herself to be Ultimecia she commends him on his determination, will, resolve and cold-heart. When Squall questions this she explains how Squall had neglected to return to assist Zidane, even though he knew he might be in trouble and how he thought true feelings were inconsequential to the task at hand. Momentarily bewildered Squall lowers his gunblade, Ultimecia accepts this and allows him to go free for now, saying that the time for their confrontation was close at hand. As he continues down his path Squall confirms to himself that what which was important to him; his duty.

Confronting Ultimecia, Squall explains that what he was doing was not out of abandonment or selfish desire, but because of a promise of duty. When Garland also appears to fight him Squall doesn't back down. Meanwhile Zidane appears to tackle Garland, leaving Squall to confront Ultimecia.

After Ultimecia is defeated Zidane explains that he had come across Squall while looking for Bartz who had fallen into a trap. Squall agrees to help immediately, when questioned about this he pulls out the lucky feather, saying that he had to return it. Together the two, with the aid of Squall's newly recovered crystal, go to rescue Bartz.

However, as the two arrive, it turned out that Bartz had escaped on his own. Even managing to steal a crystal from his captors which he showed Zidane. But it turned out that it was all a trick and as Zidane touched the crystal he was teleported away into another trap. As Squall and Bartz search for Zidane Bartz expresses his disappointment in himself for being so easily fooled and being weak. Squall gives the lucky feather back and assists Bartz just as Exdeath appears. Though Squall offers to take the villain down himself Bartz declines, saying that it was he who had to gain the strength to defeat Exdeath and not someone else. Upon Exdeath's defeat the lucky feather turned into the crystal that Bartz was searching for. Squall, his original journey completed, opts to stay with the group formed by Bartz and Zidane, who had just escaped from the trap by defeating Kuja.

Rejoining the other nine warriors as they have obtained their own crystals, the last of which is the Warrior of Light, Squalls follows with them to Cosmos' Throne where Cosmos lies waiting for them. Chaos then appears and incinerates Cosmos, killing her. Protected by the power of the crystals, the warriors do not disappear.

After the death of Cosmos, Squall confronts Ultimecia once again in her castle. Ultimecia tells him that Cosmos' final wish was fulfilled when she died and that Chaos will soon follow. In addition, Squall learns that Ultimecia wants to create a world of compressed time where she would reign supreme. Ultimecia taunts Squall on how unfortunate it is for him to be born of her world. Squall replies to Ultimecia, saying that she is the unfortunate one, for being his opponent, and that he will keep the promise he made. Squall then engages Ultimecia in combat, and emerges victorious. As she fades away, Ultimecia claims that the present era of time is just a dream, and that everything is fated to become nothingness. She then attempts to compress time, forcing Squall to slash her with his gunblade, defeating her.

After stopping Ultimecia, Squall travels to the realm of Chaos with the other Warriors of Light and confronts him directly. Upon the evil god's defeat the previously destroyed worlds are reformed and balance is restored between Chaos and Cosmos. Squall, along with the other heroes, is teleported to Cornelia of the reformed world of the original Final Fantasy where they are then returned to their own worlds. Squall returns to Balamb Garden after catching a white feather that falls from the sky. Template:Endspoilers

Squall plays in the style called Relentless Revolver, draining an opponent's BP with swift, powerful combo attacks. Some of his ranged abilities, though limited in comparison to his melee attacks, also allow him to hit multiple times. However, his HP attacks are a bit slow, and they cannot be chained.

Squall's EX Mode, Equipped Lion Heart, gives him the Lion Heart gunblade, better range, increased damage, the Regen status, and causes Solid Barrel to be unblockable. All his attacks will also inflict twice the normal amount of invidual hits. His EX Burst is his traditional Renzokuken, where Squall will attack mercilessly 8 times and the player must tap the R button repeatedly to increase the damage of his strikes, following up with one final slash, "Lion Heart(End of Heart)."

Squall can use mostly light equipment, as well as swords and boomerangs.

Template:Dissidia
Retrieved from "https://finalfantasy.fandom.com/wiki/Squall_Leonhart/Dissidia_(PSP)?oldid=593325"
Community content is available under CC-BY-SA unless otherwise noted.