Spiritus has long white hair, dark skin, yellow eyes, and a muscular build. His torso is stripped bare and he wears no shoes. Dark markings run across his arms, beneath his eyes, and the sides of his mouth. He wears dark trousers similar to hakama, with intricate designs, fastened with a blue-and-white striped cord and a red sash, that may be the top of a kimono. He wields an an enormous, ornate broadsword with a curved blade as its head.

Spiritus's trousers allude to his role as God of Magic. They have flames representing fire magic, gusts of wind representing wind magic, mountains representing earth magic, and snowflakes representing ice magic. The black parts could allude to the gravity magic commonly related to dark magic. Thunder magic, and water magic are represented in the jagged pattern formed by the white and blue cord, and white magic by the thin stripes in the red sash.

Spiritus summoned thirteen champions to fight each other to generate battle energy to sustain World B, though only ten champions gathered at his tower. There, Spiritus interrupts Materia's meeting with her warriors to declare that he rules World B, instigating the conflict between them. 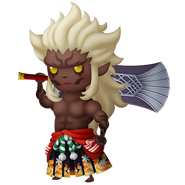 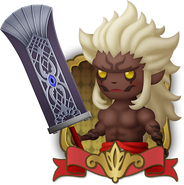 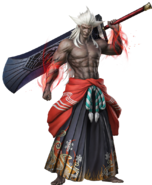 Spiritus on the NT logo.

Spiritus' introduction in the prologue/opening movie.