Detects by Sound
List of Spider Enemies
Spiders are eight-legged monsters in Final Fantasy XI that can grow larger than a tarutaru, can be dangerous to the unsuspecting adventurer. Adventurers can find themselves slowed to a crawl, and then damaged with a high-powered slash from the talon-like legs of the spider. Additionally, spiders are armed with a damaging and long-lasting poison, which can kill unprepared adventurers even after the spiders themselves are dispatched.

For those brave enough to attack these arachnids, reward awaits in the form of the spider's webs. These pieces of web are used to make Rainbow Thread, which is used in a large number of recipes, leading to the high demand for the raw material.

Some varieties of the spider are known to carry rare items sought by a few inhabitants of Vana'diel. For example, the Recluse Spider carries Shoalweed, which the Tarutaru Chamama needs, and the Aht Urhgan Attercop carries the Frayed Arrow, which Gaweesh is looking for. The rarely seen Dune Widow is also sought after for the rare and highly-prized Spider Torque. 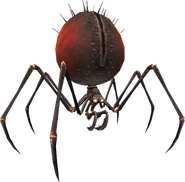 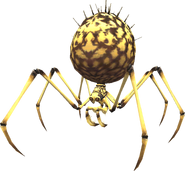