A relic from another world miraculously discovered in functional condition. The bullets shot from this gun are as sharp as the head of a spear, and its shots are so silent that one may soon run out of ammo before realizing it. However, there are times when the bullets themselves can't take the incredible firing speed of this firearm, so it is only recommended for those who are skilled at gauging distances.

The Spica (スピカ, Supika?), also known as Spica Defenders, is a recurring weapon in the series.

In the original version Spica is a high-ranked gun that requires the Guns 4 License to equip. It provides 34 attack and 5% critical, and can be bought for 13,000 gil at Balfonheim Port.

In the Zodiac versions, it now provides 38 Attack, 10 Evade, 50 CT, 5% critical rate and requires the Guns 5 license for 90 LP. It can be bought in Balfonheim Port for 11,000 gil, found as a treasure in Feywood (The Edge of Reason), poached from Shadonir (5% chance), and bought from the bazaar for 8,900 gil after selling Loot (Final Fantasy XII)#Ichthon ScaleIchthon Scale x4, Silver Liquid x5, and Wind Crystal x7. It can be equipped by the Machinist and Shikari.

The Spica Defenders are Sazh's weapon. It is a rank 5 first tier weapon. It doesn't have amazing stats, but makes buffs last longer with the Augment Maintenance passive ability. It can be bought from Plautus's Workshop for 14,500 gil and found from Nautilus in Chapter 8. It upgrades into Sirius Sidearms with a Scarletite.

Spica is a Gun obtained by buying it for 12,000 gil at Karvell Resort Town and Town of Desolation Visectrum, and by finding it at Gronoa Shrine Depths. It provides 78 ATK, +70% accuracy, has a damage range of 135-165%, and requires both hands to wield. 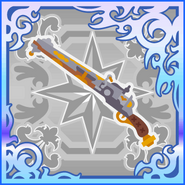