A sphere is a prevalent item in Final Fantasy X and Final Fantasy X-2 created using water infused with pyreflies. Spheres and the technology involved in their creation have many purposes in Spira, including serving as recording devices, keys, save spheres, equipment, and aiding in the creation of sports arenas. When a sphere is destroyed it dissolves into pyreflies.

Characters learn abilities and raise stats by navigating through the Sphere Grid. Each character starts in a different section of the grid and learns skills by activating "nodes". 30 different sphere inventory items are used to activate nodes, create stat nodes from empty nodes, clear nodes, unlock barrier nodes, and warp to different locations on the Sphere Grid.

Glyph and Destruction Spheres are used to navigate the Cloister of Trials, with obtaining spheres named after each temple in Spira is the objective of each temple's trial.

Spheres are used as recording devices. Yuna records a sphere for her guardians while on Mi'ihen Highroad. Tidus can discover spheres recorded by Jecht which he left behind for his son to find; finding them also teaches Auron new Overdrives.

Seymour Guado welcomes his guests in his home in Guadosalam with visions from his sphere. He explains it is a reconstruction from the thoughts of the dead that wander the Farplane.

Dresspheres act like job classes, giving unique abilities and appearances to the player characters. Characters can change dresspheres by moving from one node to another on the Garment Grid in combat.

Search Spheres locate treasures hidden throughout Besaid. Shinra's CommSpheres, placed throughout Spira in previous chapters, are the only means of advancing through Chapter 4, by communicating with people at their locations. Crimson Spheres are a type of movie sphere used to open the portal into the Den of Woe.

Spheres have gained new importance after Yevon's fall, and sphere hunting groups have sprung up to discover ancient recordings of Spira's concealed history. One such notorious sphere is known as the "Awesome Sphere".

Tidus' Crystal takes the form of a movie sphere from Final Fantasy X. It also appears as a special trade accessory obtained via battlegen when fighting a Friend Card of Tidus and is used to create the Chicken Knife.

Concept design of a lit and unlit movie sphere in Final Fantasy X.

Render of a movie sphere. 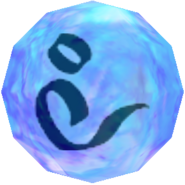 Render of a Macalania sphere.

A Water Sphere being filled for blitzball at Luca Stadium in Final Fantasy X.

YRP discover a half of sphere in Final Fantasy X-2.

Tetsuya Nomura proposed the name "spheres" for the Final Fantasy VII Materia system, but Hironobu Sakaguchi thought the name should resonate easily, even with elementary school kids, so the term Materia was chosen.[1] It is possible that Nomura's original proposition was used for the sphere system in Final Fantasy X instead.