Spencer's Place (ジャックのちかどう, Jakku no Chikadō?) is a location from Final Fantasy Mystic Quest. It is located underneath Aquaria, and is being built by Spencer, with the intention of linking Aquaria to the large lake below.

When Spencer leaves with Tristam to go treasure hunting, his granddaughter Phoebe tries to continue the tunnel. She is a very bad demolitionist, however, and instead ends up causing the tunnel to collapse. Benjamin and Reuben later return via the Rainbow Bridge to the far end of the tunnel, and destroy a rock with a Mega Grenade to allow water from the upper lake to flow through the tunnel into the dried lake. After the Dark King is defeated, Spencer returns and resumes construction. 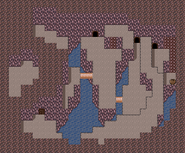 The inside of Spencer's Place. 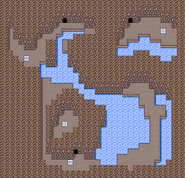 The inside of Spencer's Place after using a Mega Grenade.
Final Fantasy Mystic Quest
Deutsch
Community content is available under CC-BY-SA unless otherwise noted.
Advertisement