Grunts and their variations each have four kanji on their arms. Special Combatant's kanji roughly translate to "no use arguing about it" (問答無用, Mondō Muyō?).

While its attacks are weak, it has high HP, which makes it stronger than most enemies in these areas. It has three attacks: Handclaw, which is a standard physical attack, Beam Gun, which is 1.125 times stronger than Handclaw, and Wave, which is two times as powerful as Handclaw, is used every fourth turn, and is always used on the character who has the lowest current HP value.

By the time the player fights them, they should have several Materia pieces and be able to kill them easily with magic. If the player acquired the All Materia in the Sector 7 slums, they can link it to an offensive Materia and dispatch groups of Special Combatants easily.

Use Handclaw on random opponent

Use Beam Gun on random opponent

Use Wave on random opponent with lowest HP 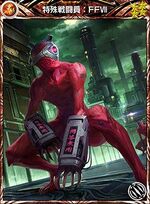 Retrieved from "https://finalfantasy.fandom.com/wiki/Special_Combatant?oldid=3238258"
Community content is available under CC-BY-SA unless otherwise noted.