Spark Dagger is a low-ranked dagger exclusive to the 3D remakes, providing 23 Attack, +2 Speed, and is Lightning-elemental. It can be equipped by the Onion Knight, Freelancer, Warrior, Thief, Dark Knight, Bard, and Ninja classes, and is found at the Vikings' Cove and Tower of Owen.

Spark Dagger is a dagger that provides 7 damage, 183 delay, and an additional Lightning damage effect when equipped with a battery. It deals 2.3 damage per second and accumulates 50 TP per hit. It can be equipped by level 12 Warrior, Black Mage, Red Mage, Thief, Paladin, Dark Knight, Beastmaster, Bard, Ranger, Samurai, Ninja, Dragoon, Summoner, and Scholar. It can be obtained from the Assault missions "Evade and Escape", Counting Sheep" and "Searat Salvation". 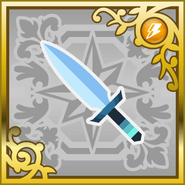 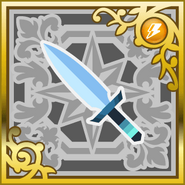 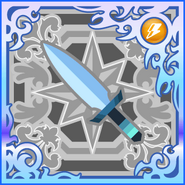