Can become more powerful items if left until World of Ruin or second trek.

Available if treasures were left in the World of Balance.

Terra, Locke, and Edgar travel from Figaro Castle to the Returner Hideout and pass through the cave to South Figaro.

Later, Locke and Celes pass through the cave the other way when fleeing the Empire at South Figaro to go to Narshe, and the Tunnel Armor comes through the wall to attack them. After dispatching the machine, they make it safely out of the cave and continue to Narshe.

After the cataclysm, the Crimson Robbers reveal a new section of the cave dug by sandworms. This part of the cave leads into the prison of Figaro Castle, which has been trapped underground when the burrowing engines malfunctioned. Edgar, posting as "Gerad", hires the group to return to Figaro to raid its treasure room, as a pretense for him to gain access to the castle and fix the engines. Celes follows the group, as does the swordsman Siegfried, who is also interested in the treasures along the way. The robbers use food to coax the turtle in the cave into moving so they can jump on it to reach the sandworm tunnels into Figaro Castle.

The cave opens from Figaro Castle to a recovery spring with a turtle living there, and this room exists into a large central cavern. A smaller upper part of the cave is to the left, and to the right the cave winds down and up to another elevated area of the cave, which descends down to the exit to South Figaro.

In the World of Ruin, most of the mountains the cave was located in are gone, the entrance near Figaro Castle has collapsed, and the recovery spring has lost its healing properties. The turtle living in the water is coaxed to move by the Crimson Robbers feeding it, allowing the player to jump over the turtle to reach a back area of the cave. This area contains numerous treasure chests, possibly left behind by the robbers during their escape, and eventually connects to the prison of Figaro Castle. After Figaro Castle is restored, the exit to the castle at the far end of the cave is rendered non-functional.

Despite the cave past the recovery spring only being accessible in the World of Ruin, and it being explained it was dug by sandworms, it is visible throughout the World of Balance. A likely explanation is simply that not all of the cave beyond that point was dug by the sandworms, just part of it connecting to Figaro Castle, and the rest of it existed beforehand.

There are three treasure chests in the cave - one located to the left of the entrance by Figaro Castle, in a sub-area, one in a side-hall far to the right in the main cavern, and the third in an elevated area in the lower-left of the main cavern. The contents of these chests vary depending on if they are opened in the World of Balance or in the World of Ruin, and one chest has a third possible item obtainable during Locke's trek through the cave. Opening any of the chests will prevent them from being re-opened on later visits.

Terra, Edgar, and Locke come through the cave when fleeing Figaro Castle after Kefka's attack. Edgar's Tools and Terra's Magic can kill most groups of enemies in one round, so it is very easy going.

Locke returns to the South Figaro Cave in his scenario with Celes Chere as the two flee the Empire for Narshe. The enemy encounters are stronger than the first visit, further complicated by the lack of a third party member.

At the end of the cave the player faces the boss Tunnel Armor, which can be dangerous if Celes is not properly equipped and/or if the party is underlevelled; Celes requires a sword to use Runic to absorb its attacks, and the boss has a powerful physical attack called Drill that can deal 100-200 damage to a character. An easy way to defeat the Tunnel Armor is to find the Thunder Rod earlier in the cave; if used as an item it casts a defense-ignoring Thundara on Tunnel Armor and will likely kill it instantly, especially if used by Celes who has higher Magic than Locke and equipment to boost it further.

The drawback of this is the player will not be able to obtain a Hero's Ring from this chest later in the game. That said, Hero's Rings can be bought at the auction house in Jidoor, so if the player does not want to defeat Tunnel Armor in a normal battle, the Thunder Rod is a safe, quick alternative.

In the World of Ruin, Celes and Sabin come to the South Figaro Cave to follow Edgar under the alias "Gerad" as he breaks into Figaro Castle with the Crimson Robbers. The cave is full of enemies that can inflict Confuse, so Relics to block Confuse are advised. In the room with the healing spring, the group uses food to lure the turtle in the water to move so they can use it as a stepping stone to access a new part of the cave. The player can then do the same; the new part of the cave has no treasures, it is a fairly straight path through to Figaro Castle.

Throughout the cave the player will encounter Siegfried, but interactions with him have no bearing on future gameplay or story events and he can be ignored. 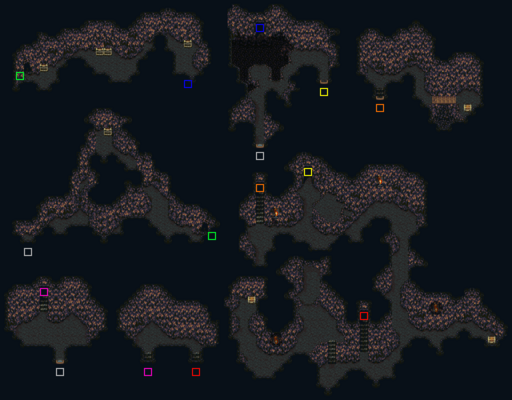 "Phantom Forest" is the track used as the background theme for the South Figaro Cave.

South Figaro Cave is the setting for a regular dungeon and is later revisited in the Challenge Events Legendary Plunder and Back to the Skies.

Locke has come to South Figaro to disrupt the Empire's occupation. Trapped under watchful Imperial eyes, he finds an unlikely ally in Celes, an Imperial general. Together they escape through the cave beneath the town. 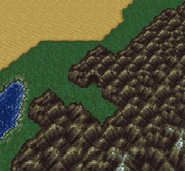 South Figaro Cave on the World of Balance map (SNES). 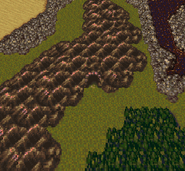 Figaro Cave on the World of Ruin world map (SNES). 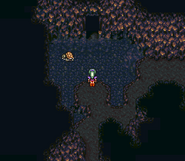 The entrance to the cave (defunct mobile/Steam).

Cave on the World of Ruin's World Map (defunct mobile/Steam).

[view · edit · purge]Figaro is a French and Italian word for "barber", as well as the name of the central character from Pierre Beaumarchais's 1775 play The Barber of Seville.