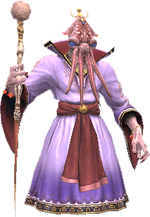 Soulflayers are enemies in Final Fantasy XI. It is said that when a Blue Mage is no longer able to control the beast within as a side effect of using Blue Magic, they lose the ability to maintain their mortal form and are transformed into Soulflayers (among other monsters). Highly trained and experienced Soulflayers are known to exist, leading some to believe that the theory is true. Soulflayers are named for their aggressive tendencies and powerful magic.

Found naturally in the Near East regions of Arrapago Reef and Caedarva Mire, these sentient beings can be extremely difficult to defeat. Soulflayers yield their robe, staff, or tentacle. The robe and staff are unusable by all but the Soulflayers themselves, but are valuable due to their being made of Imperial Silk Cloth and Bloodwood Lumber, respectively—each of which can be difficult to obtain. The tentacle appears to contain certain regenerative powers, since with some more common materials it can be made into Hi-Ethers.

Soulflayers often come equipped with a job, and will readily use the abilities granted them. 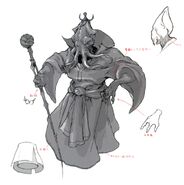 Soulflayer refers to Mindflayer. [view · edit · purge]Mindflayers, or "Illithids," are a race found in Dungeons & Dragons. They appear humanoid, with heads that resemble octopuses, and frequently are found in the Underdark. They have fearsome psychic powers, subsist on a diet comprised of the brain tissue of sapient beings, and often enslave other races.