May pain be my blade.

Souleater (ソウルイーター, Souru Ītā?), also localized as Soul Eater, or Darkness (あんこく? or 暗黒, Ankoku?, lit. Dark), also localized as Shadow Blade, Dark, Dark Wave, Darkside, or Dark Bane, is an ability where a character sacrifices a small amount of HP to deliver a strong (often Dark-elemental) attack, usually on all enemies. It is usually associated with the Dark Knight job.

Souleater (ソウルイーター, Souru Ītā?) is a reverse localization of Darkness (暗黒, Ankoku?, lit. Dark) that is sometimes localized as "Souleater".

Souleater is a job command exclusive to the 3D version of the Dark Knight. It damages all enemies at the cost of 20% of the user's max HP. This is part of the reason (the other being their weaponry) that Dark Knights are good against enemies that multiply.

Darkness (also called Dark or Dark Wave) is used by Dark Knight Cecil. Darkness has a Charge Time of 2. It deals non-elemental damage to all enemies by consuming his HP, but Flan-type monsters are immune to it. If Cecil uses it on low HP he can KO himself. This command was removed from the North American SNES version, but during Cecil's encounter with his Dark Knight copy during his Paladin trial, the copy still uses this move. Unlike every other command, Darkness is still present and usable in the Easy Type version.

In the 3D remake, Darkness is a completely different ability that empowers physical attacks at the cost of the user's HP.

The damage formula for non-3D versions is:

If the target is undead:

Darkness is an enemy ability used by the Dark Knight in the Final Tale, located in the Depths.

Zack can use Darkness by equipping the Darkness Materia. By sacrificing 12.5% of his HP, the player may damage all enemies within a radius around Zack, ignoring Vitality. The ability costs no AP to use. The Darkness Materia is obtained as a reward for missions 4-4-2 and 8-4-6, and is drops from Demon and Horned Devil, and is stolen from Land Malboro.

The Guardian Forces Diablos, Doomtrain, and Eden learn the Darkside command ability for 100 AP. It deals thrice the damage of a normal attack, but the user will take damage equal to 1/10th of their max HP. The HP loss can be offset by junctioning Drains to the character's Status Attack.

Sacrifice HP to damage all enemies.

Darkness is a command ability for Dark Knights that takes at least 300 HP from the user to damage all enemies. Darkness is a non-elemental attack.

A glitch exists that if the user equips the Ragnarok accessory, or makes it so that spells cost 0 MP, Darkness will take no HP to use.

Soul Eater is a job ability for the Dark Knight. It adds 10% of the player's HP to their next physical attack, making multi-hit weapon skills and certain weapons very formidable when used with Souleater.

The Souleater technick is unlocked for 35 LP on the License Board. It deals non-elemental damage to a ground-based opponent by damaging the user for 20% of their HP.

In the original version, Souleater can be bought in Rabanastre and Nalbina Fortress for 6,400 gil. In the Zodiac versions, it is available after the events in Mt Bur-Omisace and is also a treasure in Stage 42 of the Trial Mode with the Diamond Armlet equipped. It is available for the White Mage, Red Battlemage, Knight, Monk, Bushi, and Uhlan job classes, although the Bushi must obtain the Esper Adrammelech, and Monk must obtain the Esper Exodus license first. White Mage must obtain Adrammelech or duo with one of the many jobs that get the specific Battle Lore that lies next to Souleater on the White Mage board. In the Zodiac versions, Vossler York Azelas also has Souleater when he joins the party as a guest.

Souleater is learned by Ba'Gamnan at level 24 and consumes 25% of his HP.

Souleater is a level 26 Dark Knight weaponskill. It delivers an attack with a 100 potency normally, but combos with Syphon Strike to instead deal 400 potency damage. It also heals with a cure potency of 200 and increases the blood gauge by 20.

Darkside is a buff granted to the player after using either flood of shadows or edge of shadows granting 10% damage dealt.

Souleater is a Lanista ability that consumes 10% of the user's max HP to inflict Dark-elemental damage. Unless the target is weak to the Dark element, it usually deals the same amount of damage as a normal attack.

Dark Side is an ability for Machina that requires 5 AP and is available after learning Siphon Sword: AG ↓. Machina pierces multiple enemies in succession to drain HP and possibly inflicts Stun.

This section about an ability in Final Fantasy Agito is empty or needs to be expanded. You can help the Final Fantasy Wiki by expanding it.

Shadow Blade is a level 20 Sword Skill, which caps at level 100. It allows the user to deal additional damage at the cost of sacrificing HP, and can only be used once per day.

Darkside is an ability in the Dark Fencer crown, which also learns enhanced variations of this skill. Dark Fencer's abilities can attack one or multiple enemies, but sacrifice HP in the process.

Consumes one-quarter of max HP to deal heavy damage to a single target.

Darkness is the default ability of the Dark Knight class. At the cost of 1 MP and 1/4 of the user's Max HP, the user will inflict heavy non-elemental damage to one target.

Darkness be with me!

Cecil's Bravery attack, Dark Cannon, resembles the Dark Wave attack from Final Fantasy IV, and has Cecil charge and fire a swarm of dark energy orbs forward that swirl back towards him, dragging opponents closer. The attack costs 20 CP to equip and 180 AP to master. If the player fails to input Cecil's EX Burst perfectly, he ends the burst with Darkness, which has a similar appearance to Dark Wave.

Soul Eater and Dark Cannon are attacks for Cecil. However, Bartz can no longer use Soul Eater, instead gaining the Dark Flame ability from Cecil.

Darkness is a Bravery ability for Cecil (Dark Knight). It is a group ranged dark BRV attack that slightly consumes HP upon use.

Dark comes in three levels of power, granting boosts to Strength but increasing the damage the party takes. Dark Lv1 increases Strength by 25 but increases taken damage by 10%, Dark Lv2 increase these figures to +45 Strength and 20% damage, and Dark Lv3 grants +75 Strength at a cost of 30% more damage. Cecil learns the three levels of Dark at Levels 25, 50 and 80, and Sephiroth begins knowing Dark Lv1 at Level 1, and learns Lv2 and then Lv3 at Level 25 and Level 55.

Dark (Lv1) is a passive ability that costs 2 CP to equip. It is active for the entire length of the stage. It increases Strength by 50, but increases the damage taken by whole party and has very low strength. It is learned by Cecil (default), Sephiroth (default), Seifer (level 10), Auron (level 15), Fran (level 5), Paine (default), and Machina (level 20).

Dark (Lv3) is a passive ability that costs 6 CP to equip. It is active for the entire length of the stage. Increases Strength by 150, but increases the damage taken by whole party and has medium strength. It is learned by Cecil (level 75), Sephiroth (level 65), Seifer (level 80), Auron (level 85), Paine (level 80), and Machina (level 95).

Souleater is the ability that is used by Dark Knight Cecil during battle.

Hold down the button to continually sacrifice HP and charge up power. Steals enemy physical attack and physical defense.

Darkside (あんこく, Ankoku?, lit. Darkness) is a special ability that allows the user to inflict dark physical damage (1.5x) to all enemies while sacrificing 30% HP instead of spending MP. While all units can access this skill by equipping Diabolos (2★), who learns Darkside after spending 30 SP, the only units who naturally learn this skill are Duane (level 38, 5★), Gaffgarion (level 60, 4★), Garland (level 60, 4★) and Dark Knight Cecil (level 10, 5★).

Various Dark Knight cards have effects based on Souleater, increasing their power depending on the player's damage, or enabling them to damage all enemies while also damaging themselves.

Ingus's Dark Knight card allows the player to inflict 1000 damage to all the opponent's Forwards for a cost of two Ice CP.

The Soul Eater is Riku's signature weapon. It is a black and red sword shaped like a demonic wing with a bright blue eye near the base of the blade. Similar to Cecil, Riku is consumed in darkness in the first game of the series, but comes to gain control over the darkness and wields it to his advantage to fight for the forces of light in subsequent games.

The Soul Eater can also shift form into Riku's Keyblade, the Way to the Dawn, which retains the base appearance of the Soul Eater with the addition of an angelic white wing at the tip for the Keyblade's teeth and two other wings wrapped around the handle as a guard, symbolizing his dual nature.

A version of the technique itself also appears in Kingdom Hearts Birth by Sleep and Kingdom Hearts 3D: Dream Drop Distance, where it is called "Sacrifice".

In Bravely Default, Dark Bane is a Dark Arts ability learned by Dark Knights at job level 1. The user sacrifices 20% of their maximum HP to unleash a dark physical attack on one target that deals 1.25 times the damage of a conventional attack.

In Bravely Second: End Layer, Dark Bane is the level 1 command ability for the Dark Knight. It allows the user to sacrifice 20% of their maximum HP to unleash a dark-based physical attack.

Darkside in Final Fantasy: The 4 Heroes of Light.

Darker Side in Final Fantasy: The 4 Heroes of Light. 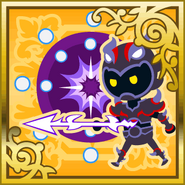 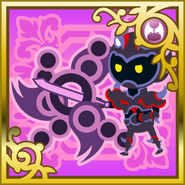 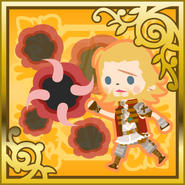 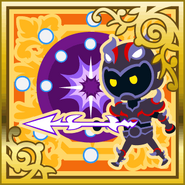 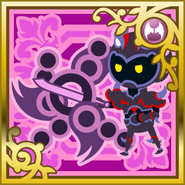 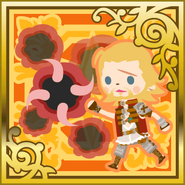 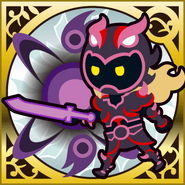 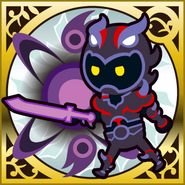 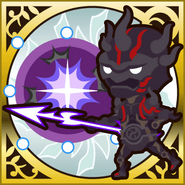 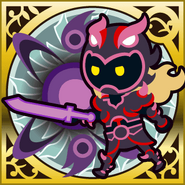 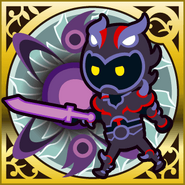 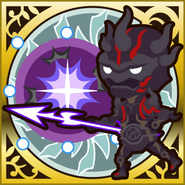 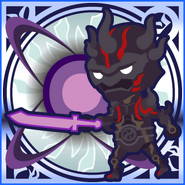 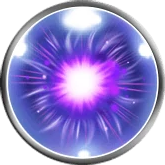 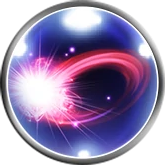 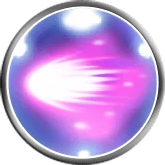 [view · edit · purge]A soul eater is a folklore figure in the traditional belief systems of some African peoples, notably the Hausa people of Nigeria and Niger. Belief in soul eaters is related to traditional folk beliefs in witchcraft, zombies, and related phenomena. The soul eater is supposedly able to consume an individual's spirit, causing a wasting disease that can be fatal.