The light and heat that radiate from this blade serve only those whom the sword has chosen.

Soul Sabre (ソルセイバー? or ソウルセイバー, Soru Seibā?), also known as Soulsaber, is a recurring weapon in the series. Originally appearing in Final Fantasy VI, it absorbs the damage as MP for the user when they damage an enemy. It is one of the first weapons in the series to drain MP when attacking with it.

Drains MP and may cast Death upon striking an enemy.

Soul Sabre is a mid-ranked sword that provides 125 Attack, +10% Evasion, drain's the target's MP, and has a 25% chance of casting Death on hit. It also enables Bushido and Runic, and has two-handed compatibility. This weapon is ignored by the Optimize option in the equipment menu. It can be equipped by Terra, Locke, Edgar, and Celes, and can be found in Figaro Castle in the World of Ruin, stolen from Shambling Corpse, or won at the Dragon's Neck Coliseum by betting the Ogrenix.

Soulsaber is a sword that provides 31 damage and 240 Delay. It deals 7.75 damage per second and accumulates 64 TP per hit. It can be equipped by level 75 Red Mage, Paladin, and Blue Mage. It can be upgraded from Side-Sword through Trial of the Magians (Trial 164).

Divine blade that suffers no neophyte to wield it.

Soulsaber is a mid-ranked saber that provides 39 Attack, 10 Magic Resistance, 5 Evasion, and is Fire-elemental. It can only be equipped by the Blue Mage.

Soulsaber is the most powerful saber, providing 62 Attack, 10 Resistance, 4 Evasion, and is Fire-elemental. It can be obtained from the Bazaar through the "Steel of Living Flame A" set.

An ominously decorated sword from a faraway world. In that world, it could be obtained in the lower depths of Figaro Castle and Dragon's Neck Coliseum.

Soul Sabre is a Sword obtained during the exploration of the Final Fantasy VI event, Figaro Castle. It provides 109 ATK, +50% Accuracy, has a damage range of 130-170%, is two-handed, and increases physical evasion by 10%. 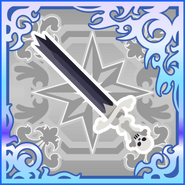 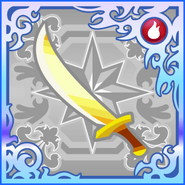 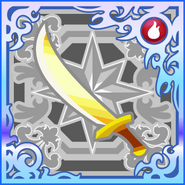