Soul Eater (ソウルイーター, Souruītā?), also known as Soil Eater, is a recurring enemy in the series. They are oftentimes the most powerful of the Nutkin enemies, having exceptionally high stats across the board. However, it has taken other forms in the series.

Soul Eater is an enemy fought in the Game Boy Advance and later remakes of the game at the Unknown Cave. They attack by draining HP from its targets and travel in large groups, but are otherwise weak foes.

Soul Eater is an enemy fought at Sealed Temple. They are capable of casting Osmose, Drain, and Death Claw, but are more fearsome for their Incisor attack which inflicts heavy damage and statuses.

Soul Eater is an optional boss fought at Forest of Spirits within The Void west of Alfheim. It is highly dangerous as it can split into five Soul Eaters if struck with any attack that ignores Defenses. Defeating it rewards the player with the Miracle Shoes. 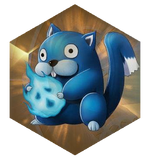 A gigantic worm that eats and fertilizes Luxendarc's soil. Watch out for its <Earthquake> attack, which strikes all its foes. Your best protection is some way to reduce earth attacks.

The Soil Eater is a bug-type enemy in Bravely Default. Its Earthquake ability deals moderate damage to all party members.

[view · edit · purge]A soul eater is a folklore figure in the traditional belief systems of some African peoples, notably the Hausa people of Nigeria and Niger. Belief in soul eaters is related to traditional folk beliefs in witchcraft, zombies, and related phenomena. The soul eater is supposedly able to consume an individual's spirit, causing a wasting disease that can be fatal.