A rare case among l'Cie, Soryu is one of the only non-human creatures chosen to serve its respective Crystal. Through its ascension to demigod status, this wyvern came to be known as the reincarnation of the Azure Dragon itself.

The novel depicts the events of the previous cycle before the final cycle depicted in the game. Soryu is destroyed by Magitek Armor carrying Ultima Bombs while defending the Concordian capital.

When Queen Andoria invokes the Fabula Pact during Class Zero's infiltration of the imperial magitek factory Soryu appears over the skies of Ingram. The ensuing ceasefire is short-lived as the queen is assassinated and the blame placed on Class Zero, a class of Agito Cadets from Akademeia who had taken leave in the city during the peace talks. The queen is succeeded by the King of Concordia who allies with Marshal Cid Aulstyne of the Militesi Empire for a joint attack on the Dominion of Rubrum and its Vermilion Bird Crystal. Thus, the Concordia's Azure Dragon Crystal falls into imperial hands. The empire has devised a way to subjugate the Crystals, and thus enslave their l'Cie. Despite this, Soryu continues to watch over Class Zero during their escape from Ingram, attempting to ensure Andoria's vision of a bright future: as part of this, Soryu remains in the local airspace, prompting Militesi forces to keep a close watch on the area and coincidentally affects how Class Zero escapes the city.

After the Concordian King's coup d'etat Soryu initially does not respond to his commands. It gives Lady Celestia access to the late queen's memories, granting her an insight into the possible future of Orience. As Rubrum now wages war on two fronts, it sends the Crimson Wings airship fleet with Class Zero and the Vermilion Bird Primus l'Cie Zhuyu Voghfau Byot to the eastern front to battle the Concordian forces in the First Battle of Judecca. Soryu partakes, implying it has been fully enslaved by the empire and forced to this task. Its breath attack annihilates the dominion's Eidolons until the Vermilion Bird Crystal deploys Zhuyu, said to be the most powerful l'Cie in Orience, to intercept it. Their battle is fierce, and enables Rubrum's forces to gain the upper hand against the Concordians despite the entrance of Lady Celestia.

With the onset of Tempus Finis, while Celestia defies the Azure Dragon Crystal in going to Rubrum to aid Class Zero, Soryu transports her before returning to Concordia and defending it from the Rursan Reavers, enduring multiple fatal injuries. As Orience is freed from its spiral and the Rursus vanish, Soryu dies.

Soryu appears on an ice-elemental card. 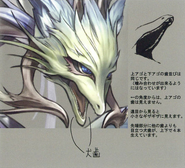 It shares its name with the Japanese name of the Azure Dragon Crystal (蒼龍クリスタル, Sōryū Kurisutaru?, lit. Soryu Crystal).