The Sorceress Memorial is a location in Final Fantasy VIII. A structure built to commemorate the Sorceress War, it also functions as a place to seal potentially dangerous sorceresses.

Although largely considered a memorial erected in Esthar at the end of the Sorceress War, the Sorceress Memorial was in truth the reason the war ended. Dr. Odine created the memorial as a facility to seal magic, then known as the "Sealing Facility". The facility became part of the plan to seal away the evil Sorceress Adel; a kind of armored cryo-capsule was placed inside and a simulacrum of the girl Ellone, whom Adel was searching for, was created. Once Adel was informed Ellone was being held inside this newly constructed building, the sorceress went there at once.

Once at the memorial, Adel saw the hologram of Ellone and realized it was a fake. However, Laguna pushed her into the seal and she was flash frozen. Because it was still dangerous to keep her there even in her frozen state, the capsule was ejected from the Sorceress Memorial into space using three Ragnarok spaceships.

Seventeen years later Esthar wants to seal Rinoa in the Sorceress Memorial after she is viewed as a threat to mankind. Rinoa, scared of her newly awakened sorceress powers, allows herself to be sealed, but Squall rescues her before she is frozen. 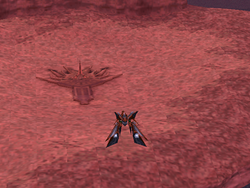 The Sorceress Memorial is located on a peninsula closest to Esthar City, but still within the borders of the Great Plains of Esthar.

The Memorial is a chrome building with a pyramid-like structure, with a set of stairs leading to the entrance inside. Surrounding it are concrete roads, with parking spaces at the front, and a tall red structure behind the pyramid.

The entrance is guarded by two Esthar soldiers, with two hieroglyph patterns on the walls and a Stop draw point to the left. The main room inside is a blue laboratory building with several computer terminals where engineers oversee the cryocapsule holding Rinoa in place. To the left from the main room is a catwalk leading to the capsule.

The theme that plays at the memorial is "The Oath". The rescue scene itself has no music.

Sorceress Memorial in the past.