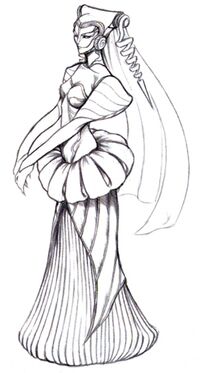 The legend goes that the Great Hyne created people. The sorceresses were given a fragment of Hyne's power. It's hard to determine how many sorceresses exist today, for many keep their powers concealed. However, it is believed that they avoid spreading their power too thin.

Sorceresses (魔女, Majo?, lit. Witch) in the world of Final Fantasy VIII are humans who have received the sorceress power, a magical power said to have been given to humanity by the Great Hyne long ago.

A sorceress differs from normal humans as they can use magic naturally (i.e. without the use of Limit Breaks or Guardian Forces—see Para-Magic) until she must eventually pass her powers to another individual at the time of her death.

Calling a sorceress a "Descendant of Hyne" is a sign of great respect. The only known male sorcerer is the originator, Hyne. Though venerated in legend, sorceresses have also been persecuted and feared due to their status.

According to legends sorceresses originate from the god Hyne who is said to have created humanity, and wield his magic. The Final Fantasy VIII Ultimania[1] states that after the people realized Hyne had tricked them by offering them a worthless part of his body that had no magic powers, they vowed to destroy him, but could never find his other half. Hyne supposedly hid the powerful side of his body inside women, which is why only women have the gift of magic.

Sorceress Edea Kramer, Rinoa Heartilly, Sorceress Adel, and Sorceress Ultimecia are met in Final Fantasy VIII. There may be more sorceresses in the world who are either unaware of their powers or hiding them from the world at large.

Although sorceresses are the game's primary villains not all past sorceresses were evil, as some were known to have used their powers to help people. The Final Fantasy VIII Ultimania guide has a transcript of a SeeD lecture that posits there were three historically significant sorceresses: one stood up for the people of a small country when it collapsed, another caused the Sorceress War, and a third cooperated with the government to develop Para-Magic. While the second sorceress is obviously Adel, the identities of the other two are not given, though there is speculation that the third is Edea; considering her ties to the Garden, which uses Para-Magic, and that the instructor in the transcript mentions that she is the one "most familiar to us".

Sorceress power has been passed throughout history by the process of embodiment. Any person who has the capacity to embody the great sorceress power is a candidate.

Any woman with the potential to receive sorceress powers may become a sorceress. The process is called embodiment, wherein a dying sorceress passes on her powers to a chosen successor who is unable to reject the transfer of power. Once an individual becomes a sorceress she may still be used as a successor for the powers of another sorceress.

A sorceress must be free of her powers to die in peace. It is never explained what happens to a sorceress who cannot relieve their powers, but the sorceress power may render a sorceress unable to die until they have found a successor. The sorceress's body may also release the power after a near-death experience, although such is a rarity. This happens when Edea is defeated by the SeeDs and her sorceress powers transfer to Rinoa even though Edea survives.

The specific profile of the successor to a sorceress's powers has never been stated. They may have supernatural characteristics other humans lack, such as the case with Ellone who was once chosen as the successor to Sorceress Adel's powers. Her hometown of Winhill was raided twice by Esthar soldiers in search of a successor, and the second raid specifically targeted her. Ellone can transfer one's consciousness into the past or communicate with others telepathically, and this may have prompted Esthar to seek her out.

A physical trait many sorceresses have is the appearance of wings or wing-like structures from their backs when they use their power. Rinoa's white wings appear during her Angel Wing Limit Break, and once in a vision experienced by Squall. Ultimecia has black demonic wings and Adel has dark, sharp wings. Edea doesn't have wings but wears a golden ornament that sits at her shoulders with two veils of gauze hanging down, which somewhat resemble wings. What physical effect being embodied by the sorceress power has is unclear—the sorceresses that have used their powers a lot are depicted as more monstrous, but how their transformations happened is unknown. Edea has glowing veins and yellow eyes when under Ultimecia's control, but loses these traits after regaining her old self.

Individual sorceresses are depicted wielding different types of magic. Whether this means they simply prefer different ways to use magic, or if the sorceress power manifests in different ways in different individuals giving them different powers, is unknown. Most sorceresses shown using magic in Final Fantasy VIII do so under Sorceress Ultimecia's control, making it ambiguous on to what extent their powers are derivative of being possessed.

Edea uses various elemental magic, favoring ice in juxtaposition to her knight when under Ultimecia's control, Seifer, preferring fire spells. Edea also magically changes the length of her hair, phases through a door, brings a statue to life, and commonly enthralls people, making them do her bidding or behave like puppets under her complete control.

Rinoa uses life-giving magic, though seemingly obliviously, reviving both Seifer and Squall with magic from an unconscious state. The time she revived Seifer she was under Ultimecia's control before passing out. She is also shown transforming a flower petal into a white feather that seems to act as an extension of her being as it seeks out a lost Squall.

Adel uses destructive magic of pure energy, forgoing traditional magical elements. She also junctions Rinoa into her own body and uses her as an energy source. Adel's grotesque physique suggests she may have used magic to transform her appearance.

Ultimecia favors magic that transforms time and space. She can manifest concepts into corporeal beings, such as when she looks into Squall's heart to find what he fears to create Griever to oppose him.

A recurring trait of sorceress's magic absent from the Para-Magic wielded by regular humans is the ability to transform and transcend space, time and themselves.

A knight will present you with peace of mind. He will protect your spirit.

The term sorceress' knight (魔女の騎士, majo no kishi?) is applied to a male companion who protects the sorceress. The knight protects his sorceress both from external dangers and her own powers. Seifer Almasy serves Ultimecia, Squall serves Rinoa (who jovially calls him an "apprentice knight"), and a fictional knight is portrayed by Laguna Loire in a movie. It is implied that Cid serves as Edea's knight, as she refers to him as such during her conversation on the topic with Rinoa at Edea's House. The position of a sorceress' knight has been seen as a romantic or honorable; Seifer claims his childhood dream is to be a sorceress' knight and retains the sobriquet even after his defeat by the SeeDs causes him to lose Edea/Ultimecia. There are multiple works of fiction that portray the sorceress and knight relationship in a positive light.

Knights can take additional roles in the service of their sorceress. For instance, Seifer commands Galbadia's military forces when Ultimecia takes control of the country. With Cid as Edea's knight, he manages the SeeDs for her until Squall takes over the organization.

Every known knight has a bond to their respective sorceress. The nature of the bond varies with each pair. Squall and Rinoa have a romantic connection; similarly, Cid and Edea are married. In contrast, the bond between Seifer and Edea stems from Ultimecia brainwashing him, although the position is also Seifer's "romantic dream," implying a level of fascination and emotional attachment to his charge. Seifer's comments to the party later imply the bond is related to his filial connection with his "Matron" from recovered memories of his time living at Edea's House.

Just as there has not been a mention of a male sorcerer, there are no known female knights.

Rinoa is playable. Her stats are not altered after she inherits sorceress powers and she still cannot wield magic without the Magic command, but she gains a new Limit Break, the Angel Wing.

Edea is playable briefly, but unknown to her is no longer a sorceress at this point. Edea can only use magic via junctioning like the rest of the party and can still use her Limit Break, Ice Strike. Her regular attack appears to be magical, as she wields no weapon. 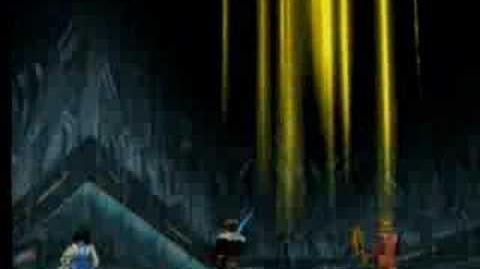 Edea is fought as the boss at the ends of discs 1 and 2—at the Deling City parade and at the Battle of the Gardens. The battle at the parade is scripted and cannot end in a Game Over, but if the player fails to reduce Edea's HP to zero they miss out on the battle spoils.

Adel is fought past the point of no return at the Lunatic Pandora with Rinoa junctioned into her body. The party must defeat Adel without hurting Rinoa, as if Rinoa dies it is Game Over.

At the start of time compression, Squall and the party fight eleven incarnations of sorceresses from different time periods. Though there are eleven, they only have three distinct appearances.

The party fights Ultimecia at Ultimecia Castle as the final boss. She junctions herself onto Griever, and later transforms into an ultimate form that absorbs all space and time.

While visually the game presents near-future scifi, Director Yoshinori Kitase wanted the story to be rooted in fairy tale, and thus sorceresses became the main antagonists.[2]

The Japanese term used in Final Fantasy VIII is "witch" rather than "sorceress". This is why the term "witch" appears in the "Succession of Witches" phrase that is an anagram from FITHOS LUSEC WECOS VINOSEC, the lyrics that open the game in "Liberi Fatali." The term refers to an old European folk belief of a person who causes harm to humans and animals via the means of witchcraft.

In Dissidia Final Fantasy the term "witch" is used almost exclusively in the English localization. In Ultimecia's profile in the museum in Dissidia 012 Final Fantasy, Ellone is stated to be a sorceress. This is a translation error, as the original Japanese profile does not say this.

The sorceress is called Hexe in German, Strega in Italian, and Bruja in Spanish.

The appearance of the sorceresses could be based on the conceived appearances of Buddhist demons known as asura. The most evident example of this is in their appearance as beautiful women with deformed hands and feet, as well as in the wings and horn-like protrusions.

Sorceress's knights are mentioned in Final Fantasy XIII-2 as the answer to one of the possible questions in Captain Cryptic's Confounding Quiz. The question is: Which celebrated movie introduced the gunblade, a now-popular toy among kids? The answer is "The Sorceress's Knight." The movie itself is a Final Fantasy VIII allusion, alluding to the movie Zefer, in which Laguna Loire played the knight.