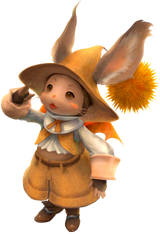 Sorbet (ソルベ, Sorube?) is a moogle from Ivalice. He is one of the six moogle siblings and is the brother of Montblanc. A bit clumsy, Sorbet manages a Moogling post in Rabanastre in Final Fantasy XII and is involved with a hunt that Vaan participated in. Sorbet is also the main protagonist of Dive II Hunt. Since this, it appears he is fine being in water, despite the Final Fantasy Tactics A2: Grimoire of the Rift information claiming his race hates it.

Sorbet runs a Moogling station in Rabanastre Westgate, outside the aerodrome. He was entrusted with a key he lost while eating a sweet and tripping over himself, with both items landing in entrance to the Garamsythe Waterway, where the White Mousse ingested them. Sorbet petitioned a hunt for the mutant to his brother, meeting Vaan's party as a result.

After the Flan is slain, Sorbet reacquires the key and repairs it so he could access different parts of the Garamsythe Waterway. Sorbet later meets the party again when he learns Yiazmat has been slain.

Sorbet was a moogle doll in the quest "The Brothers Kupomazov" in the Moogle Chocobo Carnival.

Sorbet is the second son,
coddled more than anyone.
Find him slumb'ring in the arms
of she who keeps him safe from harm.

Kupo! I want to enter the tournament, kupo!

Sorbet is the starring character. Sorbet has to swim around collecting items in the hope of becoming the "Hunter Dive Master". While grabbing gil and other items, players must watch out for enemies and keep an eye on Sorbet's oxygen levels.

The game could be played at the Japanese and North American version of the Square Enix Members website, but only by logged-in users. The Square Enix title features original artwork by Ryōma Itō.

Sorbet appears as the second statue next to the journal at the upper screen after Montblanc. He wears his Final Fantasy XII outfit and sits with Horne.

In the Side Story[]

At "Chapter 4: Hurdy Heads for the Hills", Hurdy mentions that whenever Sorbet saves up enough gil, he disappears on long, meandering trips. Sorbet gives advice to Hurdy (which he also follows himself) that he will be carefree and happy wherever the journey leads him. He also requests something sweet from Hurdy.

Sorbet appears on a Triple Triad card in the version playable via Final Fantasy Portal App.

Sorbet on the back cover of volume 4 of the manga.

[view · edit · purge]Sorbet is a type of frozen dessert.