A cheerful fourteen-year-old who grew up on Destiny Islands, a small archipelago in the midst of a vast blue sea. He becomes the wielder of the Keyblade, a strange sword in the shape of a key, as he journeys from one fantastic world to another.

Sora is the main protagonist of the Kingdom Hearts series. A teenage boy from Destiny Islands chosen by the Keyblade, a weapon of light that can destroy the dark creatures known as Heartless, he set out on adventures to save the worlds from the forces of darkness. Sora has also appeared in the Final Fantasy series.

Sora's appearance in Final Fantasy Record Keeper is based on his original appearance from the first Kingdom Hearts game. He wears a red shirt and pants with a black, blue, and white jacket, a blue belt, yellow boots, and large white gloves. He also wears a crown emblem necklace, a recurring symbol in the Kingdom Hearts franchise that serves as his personal sigil at times. This outfit is Sora's iconic attire and the one most often used in both the franchise and cameo appearances.

In World of Final Fantasy, Sora appears as a Lilikin with his Kingdom Hearts Dream Drop Distance attire. These clothes consists of red shorts with a black top and jacket with red and silver details, including a crossing pair of silver traps over his chest.

In all his Final Fantasy appearances, he has been shown wielding the Kingdom Key, the default and iconic version of the Keyblade.

Sora is blithe, adventurous, and caring. His capability to open his heart to others and never turn away from those in need is a defining trait of his. In a pun on Sora's name (which is Japanese for "sky"), a recurring idea in the Kingdom Hearts franchise is that all the worlds, though disconnected, "share the same sky", having the double-meaning that Sora connects countless worlds and peoples in them that he has bonded his heart with. His optimism, determination, and willingness to help others make him highly resistant to the corrupting influence of darkness, though he has fallen victim to it multiple times through indirect methods, as no normal heart is entirely devoid of darkness.

It is this same personality that allows Sora to make friends and allies in every world he visits, which strengthens his heart further. A major plot point is that, at the outset of his adventures, Sora was not intended to receive the Keyblade and it happened largely by accident, but his experiences have empowered his heart to the point it has genuinely chosen him as its wielder. 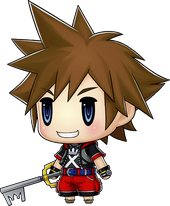 Sora debuts in the Final Fantasy series as a summonable DLC Champion, though he is no longer available. His appearance is based on the one he had in Kingdom Hearts Dream Drop Distance.

His signature attack is Ragnarok, which inflicts light-elemental magical damage to one enemy, ignoring its defense, and bestows Regen to all party allies. Summoning him has a gauge cost of 2★.

In the Japanese version, Miyu Irino voiced Sora for his summon sequence. However, the English version doesn't have any dialogue.

Sora is a playable character who could be exclusively recruited during the Collector's Event Key to Another World as a First Time Reward for completing the event's Destiny Island - Seashore stage.

[view · edit · purge]Sora (空?) means "sky" in Japanese. It also is a common unisex given name.