Sophia, the Goddess is a primal from Final Fantasy XIV, who appears in version 3.4, "Soul Surrender".

History tells of a Meracydian nation comprised of a multitude of races, the foundations of which were built on the worship of a single deity. The "Goddess," as she was simply known, graced the souls of her worshipers with perfect equilibrium, binding their disparate societies in gilded chains of harmony.

Sophia was created near the end of the Third Astral Era by the collective faith of the numerous races of a Meracydian nation to repel invaders from the Allagan Empire. Though powerful, Sophia was captured and imprisoned with the other members of the Warring Triad in Azys Lla, where advanced Allagan technology drains her power while keeping her physical form intact. After the Allagan Empire fell, the Warring Triad remained in suspended animation for centuries until the actions of Archbishop Thordan VII weakened their seals with Sophia being the second to nearly escape imprisonment after Sephirot's defeat.

Guided by Unukalhai, the Warrior of Light and Krile venture to Containment Bay P1T6 to unseal and defeat Sophia before she can escape and unleash unthinkable catastrophe.

Sophia, like Sephirot and Zurvan, are based on their Final Fantasy VI counterparts. Sophia is inspired by the Goddess. Her name is taken from the working name she was initially given before simply being called Goddess in Final Fantasy VI.

Like Sephirot, a rearranged version of "Battle to the Death" from Final Fantasy VI plays in the first phase of the battle against Sophia. A new song called "Equilibrium" plays during Sophia's second phase (when she uses her signature attack, The Scales of Wisdom), unique to her.

In the original concept artwork ( 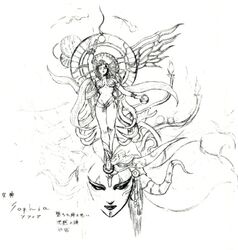 ) for Final Fantasy VI by Tetsuya Nomura, the Warring Triad are named beyond their basic titles. Goddess is named Sophia. Sophia, Greek for wisdom, is a central idea in Hellenistic philosophy and religion, particularly Gnostic Christianity (which much of Sophia's concept, dialogue and "flavor", such as ability names, further reference), Platonism, Orthodox Christianity, Esoteric Christianity, as well as Christian mysticism, and is commonly represented as a goddess.

In Gnosticism, Sophia is an Aeon who created the Demiurge which in turn created the material world.