Quest: Vanished with a Trace

Chitetan
The Soothsayer is a fire-elemental Eidolon from Final Fantasy Dimensions II. She can be obtained as a signet for Jornee to equip as the first-time completion reward for the "Vanished with a Trace" side quest in the Ancient Era Mysidia Palace.

The Soothsayer signet is an adequate upgrade for Jornee when it becomes available to obtain, serving as a good replacement for any of her default summons. Despite having a passive of boosting Jornee's magic critical rate by 17%, the Soothsayer's signet is too weak to take advantage of the passive and is easily replaceable.

The Soothsayer is depicted as a young female fortuneteller wearing robes and a pointy hat. She is seated on a broom and has the Crystal Eye seated on her lap. As her signet evolves, the Soothsayer's robe begins to change to pink and her decorations become more elaborate.

The Soothsayer is an homage to the witch Matoya from the original Final Fantasy, evident with her similar witch-like outfit, being seated on a broom, and carrying the Crystal Eye often associated with Matoya, which is also the name of the Soothsayer's summon attack. In addition, the Japanese katakana for each of their names are very similar, with the Soothsayer's name being (スーセーヤ, Sūsēya?) and Matoya being (マトーヤ, Matōya?).

The Soothsayer's summon attack is Crystal Eye, which allows all party members to negate a single attack. Summoning the Soothsayer costs 2 bars from the Summon Gauge.

The following are the abilities Jornee can learn from the Soothsayer: 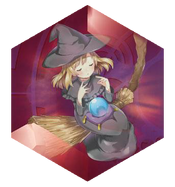 In the original free-to-play versions, the Soothsayer was a normal fire-elemental summon that originally could only be obtained through a promotional code through a Famitsu interview with game director Takashi Tokita and Yuki Fukuda on the Famitsu App. The summon's official description jokingly referred to the Soothsayer as Fukuda's apprentice in fortunetelling. This version taught a rare ability known as Tuning, which filled the user's Summon Gauge. [1]

A second version could be obtained through the game's summon draw shop and taught Third Eye abilities instead.

Both versions could be equipped by all party members.

In the premium versions, the Soothsayer was changed to teach Fira abilties instead.

A soothsayer is a person who practices divination.