Sonic Wave (ソニックウェーブ, Sonikku Wēbu?) is a recurring ability in the series. It often deals non-elemental damage to the entire party, and is primarily used by enemies.

Sonic Wave is an enemy ability used by Oilboyle. It inflicts non-elemental damage and Curse to the party.

Sonic Wave is an enemy ability used by Achelous and Phlegyas after using Charging three times. It inflicts non-elemental magic damage to the party with a power of 14.

Sonic Wave is an enemy ability that reduces defense of enemies in an area of effect. It is used by the Dhalmel family.

Sonic Wave is an ability used by Filo at level 2. It simply damages multiple foes.

In Bravely Default, Sonic Wave is a Special Move for swords that allows the users to attack one enemy with wind for six times the damage of a conventional attack. For the duration of the music, all allies' Physical Attack is raised by 50%. The user must Brave 30 times.

In Bravely Second: End Layer, Sonic Wave is the level 3 offensive-type Special Move for swords that allows a character to attack one enemy with wind. For the duration of the music, the P.Atk of all allies is raised by 50%. Music bonuses will stack with other attribute bonuses. 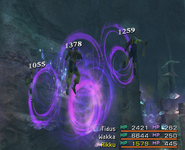 This gallery is incomplete and requires Final Fantasy XI added. You can help the Final Fantasy Wiki by uploading images.
Enemy abilities
Community content is available under CC-BY-SA unless otherwise noted.
Advertisement