Dance, Sing
Has no Attack command

Aid allies by singing and dancing your way to victory.

The Songstress is a dressphere in Final Fantasy X-2, available after the first boss battle with Leblanc, which gives a tutorial on spherechanging. It specializes in inflicting status ailments on enemies and buffing the party.

The Songstress dressphere serves a key role in the story. For unknown reasons, when Leblanc uses this dressphere in the beginning of the game, it turns her from an exact double of Yuna in her summoner appearance into Yuna's Songstress outfit. This may be because Leblanc was using Yuna's Garment Grid with Yuna's summoner appearance considered her "default" before the Freelancer class was created.

The Songstress dons light dancing clothes with floral sleeves and uses a microphone as a weapon.

Yuna wears a blue top with white ruffles on the front and extended down to her knee on the left side. She wears a short, black lace skirt with a white belt. She wears blue glovelets fastened by black straps. She has black ribbons on her upper arms and knee-high brown boots. Her microphone is blue. Yuna's appearance is replicated from Lenne, the spirit harnessed as the Songstress. According to the Final Fantasy X-2: International + Last Mission Ultimania, the dressphere resonates sympathy from Yuna because both Lenne and Yuna have lost their beloved.

Paine wears a long-sleeved high-collared white jacket with turquoise lining and rim. Her sleeves have turquoise glovelets held on with black studded straps. Under the jacket, she wears a black bikini top. She wears long tight white pants silver chains around her thighs, and brown boots with turquoise ruffles. Her microphone is teal.

Yuna's victory pose is to dance, ending with a jump and her hand on her hip. Rikku performs a dance, ending with her fist lowered to her chest. Paine turns around and lifts her arm above her head. The girls will not pose if they are already dancing.

Mastering Songstress requires 740 Ability Points. Songstress has two main commands, Dance, which applies an effect to either the enemy or player party which stays in place as long as the Songstress is dancing, and Sing, which increases the player party's stats. While dancing, musical notes appear around the girl and waves of light bounce around her in a circle. While singing, an upward swirl of lights and ascending musical notes appear. Each girl sings a scat rendition of her musical theme when using the Sing command. In the Final Fantasy X-2 HD Remaster, the girls' singing may be delayed as they will sometimes sing mid-battle long after having used an ability, or after winning a battle, though they still may sing "right on cue".

Dance and Sing cannot be accessed outside of the Songstress dressphere because of the animations used. Songstress has no means of attacking unless afflicted with Berserk or using the Mug command, whereupon Songstress attacks an enemy with her microphone, causing a small explosion with musical notes.

Both books of Magical Dances must be obtained as treasures in Chapter 5; Vol. I can be found inside the Den of Woe, while Vol. II is given to the party in Djose Temple after defeating the Machine Faction's Experiment machina at its maximum level.

The Songstress dressphere increases Defense, Magic Defense and Evasion by 1 point per each level. This dressphere is required if the player desires to switch characters to access different skillsets. Its regular attack range is one tile ahead of the character. Multiple copies can be found on the ground inside the tower or bought in shops.

Yuna's second alternate costume is Songstress Garb, based on the Songstress dressphere from Final Fantasy X-2. It has three color variations. 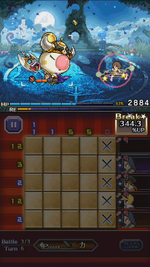 The Songstress appears as a job for Princess Sarah.

Yuna and Rikku appear in their Songstress outfits during in-game cutscenes, for example the concert atop the Celsius in Chapter 2 and the dancing minigame in Chapter 4.

The Shmooth Shailing accessory obtained through scoring 150+ points in the dancing minigame is arguably a bespoke Songstress accessory as, on top of its defense enhancing and negative status negating properties, it bestows a permanent slow effect that serves to prolong the effects of a dancing Songstress.

Each member of the YRP had official phone strap accessories released in the wake of Final Fantasy X-2. Unlike Rikku and Paine, Yuna had two versions: one in her Gunner gear, and another one of her as a Songstress.

Yuna as a Songstress.

Rikku as a Songstress.

Paine as a Songstress. 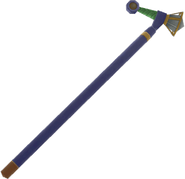 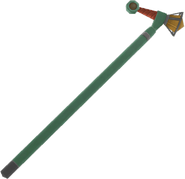 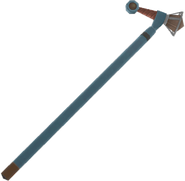 Lenne as a Songstress.

Songstress dressphere in the opening.

Yuna can't stop dancing as a side effect of the dressphere. 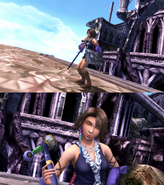 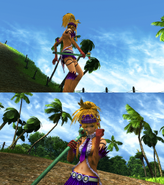 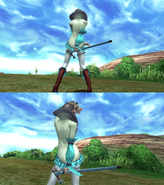