Song of the Savior

I am the true savior. I was made to serve god. But if that god lies to me, then he dies!

Lightning in the Song of the Savior.

The Song of the Savior (解放者の伝説, Kaihōsha no Densetsu?), known as The Legend of the Savior in the Japanese release, is a stage performance in Lightning Returns: Final Fantasy XIII held every night in Yusnaan at 3 AM. It tells the story of the savior, a divine warrior woman chosen by the god Bhunivelze who arrives at the end of days to save humanity's souls and usher the coming of the new world.

Lightning tries to come up with a way to re-infiltrate Snow Villiers's palace to save his soul. Hope Estheim suggests she become the lead actress in the show and rig the fireworks to topple the Statue of God in Augur's Square to cross the palace walls. After convincing Director Sarzhak to let her star in the play, Lightning gathers the Fireworks and competes in the Slaughterhouse to win the appropriate costume, Midnight Mauve. She plays the part of the savior and the statue falls, enabling her to leap over the palace walls and continue her mission.

After the statue has fallen performances of the play are cancelled, with many disappointed spectators around Augur's Square commenting they are disappointed to have missed it.

Entry 1
Hope cones up with a plan B. He thinks that if Lightning can somehow topple the giant statue that forms the main set of the theater show, she will be able to use it as a bridge to get over the palace walls. In order for Lightning to be in position when the statue is brought down, she must talk to the director of the show no later than 12:30 AM.

Entry 2
Lightning wants to increase the number of fireworks that are launched at the show's climax, and the director Sarzhak agrees. He's bored of the show and leaps at a chance to shake things up. Lightning now needs to scour the city for fireworks and deliver them to the crew chief. She needs lots of them—that statue is not going to come down easily.

Entry 3
Hope has a surprise for Lightning. He tells her that the only way she can be in the right position when the statue falls is to be on stage as a performer. The director agrees to give Lightning the starring role—but only if she has her own costume. Lightning needs to fight in the arena, win the perfect costume, and get back to the show in time for her 3:00 AM cue.

Entry 4
Zoe is the owner of the Slaughterhouse and a former actress who once played the role of the savior, She gives Lightning her old costume as a reward for Lightning's victory in the battle arena. The grand plan is about to go into effect. Lightning just has to fer into costume and talk to Sarzhak by 3:00 AM, in time for the show's grand finale.

Entry 5
At the climax of the show, Lightning appears on stage in her role as the savior. Sarzhak suspects what she is up to, but has decided to play along and give her the fireworks show she asked for. The towering statue is shaken to its foundations, and then with a massive roar, it topples onto the palace walls.

Lightning and Hope devise a plan to cross the palace wall by toppling the Statue of God during the night's performance. After speaking with the director and the Pyrotechnician Boss on the site, Lightning is tasked with bringing ten Fireworks before 12:30 AM. The Fireworks are obtained via numerous ways. The boss will hand out the Boss's Note and ask Lightning to visit four locations marked on the map.

The player can visit the locations as the boss asked but while working on the current objective, two side quests are available, and it might be a good idea to complete them first: "Fireworks In A Bottle" and "Fireworks For A Steal". Completing these two side quests earns 11 Fireworks (which is more than needed), and will save time. The Chocobo Girls also give fireworks in exchange to a password.

If the player doesn't want to do the side quests, they can visit the locations marked on the map. Lightning must return to the boss before 12:30, or wait for the next day. The first technician is next to the Cactuar Statue and gives three fireworks, but must be reached before 10:30 PM. The technician on Central Avenue gives four fireworks by completing "Fireworks In A Bottle" quest before 11 PM. Near the Slaughterhouse the next technician visited before 11:30 PM gives three fireworks. North towards the train station one can get two additional fireworks from the fourth technician, who will disappear at midnight.

Fighting at Slaughterhouse between 1 AM and 3 AM pits Lightning against a Personal Guard to win a Fireworks.

After getting enough fireworks Lightning must return to the Augur's Quarter and talk to the Pyrotechnician Boss again.

After handing out the Fireworks, Lightning must speak with the director and convince him to let her play a role on the stage. The director says he will let Lightning on the performance, if she wins a suitable outfit to wear from a Slaughterhouse tournament, starting the "The Fighting Actress" quest. Lightning must be back with the Midnight Mauve garb by 3:00 AM. The player can do other side quests until 3 AM, and then talk to Sarzhak, this completes the quest. 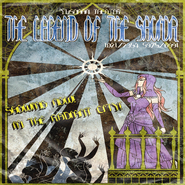 Poster advertising The Song of the Savior.

[view · edit · purge]A savior is a person who helps people achieve salvation, or saves them from something. They have appeared under numerous names in religion, such as Soter, Saoshyant, Redeemer, Messiah, Mashiach, and Mahdi.