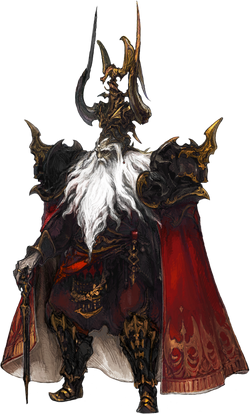 No lands must remain beyond our grasp. Go forth. Conquer. Rule.

Solus zos Galvus (ソル・ゾス・ガルヴァス, Soru Zosu Garuvasu?) is a non-playable character from Final Fantasy XIV. He's the founder and first emperor of the Garlean Empire, and the grandfather of Varis zos Galvus and great-grandfather of Zenos yae Galvus.

Solus zos Galvus, was born in the year 1489 of the Sixth Astral Era to the esteemed House Galvus, a distinguished family of pureblood Garleans in the then small Garlemald Republic. He joined the military at the age of sixteen, where he immediately distinguished himself from the rank and file as a brilliant tactician and statesman and attained the rank of legatus by his twenty-fourth nameday in 1513.[1]

Shortly achieving the rank of legatus, Galvus learned of the newly-invented ceruleum engine, and saw great potential in it. Galvus guided the development of magitek weapons, and devised tactics for these warmachina. Galvus also saw them integrated into the army, and imbued the military with mechanical might.[2]

At first, Galvus's innovations were viewed with a skeptical eye. However, as neighboring nations began falling to Garlemald's warmachina, the people realized the wisdom in his decision. As if to avenge every wrong ever done to them, the Garleans invaded the countries of norther Ilsabard and annexed their lands. To expand its small army, Garlemald recruited the subjugated peoples, promising to better their lives with magitek technology in exchange for service. This cunning carrot-and-stick strategy made the republic greater and more powerful with every victory.

As triumph followed triumph, the Garleans' respect for Galvus grew, eventually transforming into worship. In 1517, he was granted control of Garlemald as dictator by overwhelming popular support. The same year, the republic attacked Dalmasca, a small country nestled in the central mountains, and rained down fire upon it with their new airhships. Thus, the Garlean army turned to conquer the south of Ilsabard. In 1522, this campaign ended in victory. Having unified the continent through force for the first time in history, Galvus proclaimed himself Emperor, and thus created the Garlean Empire.[3]

In spite of Galvus's many successes and victories, however, it is difficult to characterize his life as happy: he was betrayed by those he had believed his closest friends, and lost his firstborn son to illness when the boy was still young.[4]

Though he had already accomplished the impossible, Galvus was not content with Ilsabard alone. Six years after becoming Emperor, he set his gaze upon the eastern continent of Othard and marched upon it with a great host. With their warmachina at the fore, the imperial forces toppled all who dared stand before them.

It was during this campaign that Galvus first laid eyes upon the ruin wrought by Primals—an entire land utterly drained of life. It is believed that this terrible sight ultimately led the emperor to issue an imperial mandate for the annihilation of the dread beings the Garleans dubbed "eikons," refusing to believe them of divine origin.

After a long and hard-fought resistance, the nation of Doma fell to Garlemald in 1552. With this, Galvus had conquered the east. Now, he turned his armies towards the west, plotted the invasion of Aldenard, and captured Ala Mhigo in 1557. However, this was to be the last victory for some time.[5]

Once Ala Mhigo had been fully assimilated into the empire both politically and economically, the XIVth Imperial Legion focused on hastening the progress of the Eorzean campaign. In 1562, the Imperial fleet accompanied by the mighty flagship Agrius forged its way into Mor Dhona to Silvertear Falls. It was there that the legion's armada encountered unexpected resistance, yet not at the hands of man, but of the Wyrm Midgardsormr—forgotten guardian deity of the lake. The great dragon called out to his kin, who pitted themselves against the Garleans' fleet in an aerial battle of epic proportions. The battle ended when Midgardsormr and the Agrius collided and plummeted to the land, compelling the legion into a swift and complete retreat from Mor Dhona.

Not long after Midgardsormr's demise, something unexplained occurred. Eorzea's beast tribes began summoning their own "gods"—the primals—into the corporeal realm. As per the prior-established imperial mandate, these powerful creatures were deemed a threat to imperial rule and soon made a target of its armies.[6]

Shortly after the defeat at Silvertear Falls, the Garleans attempted communication with the lesser moon Dalamud under the guidance of the Empire's principal engineer and grand minister of industry, Midas nan Garlond. Dubbed "Project Meteor," the operation's single test was conducted in the imperial stronghold of Bozja Citadel using Allagan artifacts donated by House Darnus.

The project was proposed by nan Garlond after Emperor Galvus had tasked the engineer with finding a solution to the eikon threat. From records discovered within the artifacts, the grand minister was able to glean that the armies of Allag had also exchanged blows with eikons, eventually conceiving a method to overcome the beings. Further research uncovered that the lesser moon Dalamud was not a natural celestial body, but rather an ancient satellite of Allagan manufacture. Nan garlond surmised that within the moon's metallic nacelle slumbered a great source of untapped energy—forgotten power which could transform the moon into a weapon of absolute destruction if pulled down from the skies and unleashed upon Eorzea. The moon would serve as the Empire's own "meteor."

Mere days after receiving the Emperor's blessing, nan Garlond would travel to the Garlean city of Bozja to conduct the first attempt to communicate with Dalamud. The immensity of the satellite's power was indeed confirmed that day, but at a disastrous cost. Nearly five millennia-worth of amassed energy was directed by the moon to the citadel's makeshift transmission tower. The beam emitted by Dalamud was so intense that not only the twewr, but the entire city was evaporated in an instant. Efforts were made by the Imperial Censors to hide the event from public scrutiny, but the vanishing of a major commercial center was too big a secret to suppress. News o f the catastrophe quickly spread across Hydaelyn and later became known as the Bozja Incident.

The loss of Midas nan Garlond, the lunar transmitter, and the entirety of the Allagan records stored at the Gozja Citadel seemingly sealed the fate of the Meteor Project. The emperor declared he had no interest in power of such an unpredictable nature and ordered the project be dismantled immediately.[7]

During empire's decade-long stalemate with Eorzea, Emperor Galvus publicly recognized Legatus Nael van Darnus—also known as the White Raven—as a man of exceptional talent for his scores of crucial victories in the empire's eastern campaign. Despite being well past his eightieth nameday by the year 1572, the emperor's ambitions to unify the Three Great Continents under Garlean rule were as strong as ever. After amalgamating the political affairs of the occupied territories in Othard, he set his sights once again upon Aldenard and her vexing eikons. When the Emperor declared the annihilation of the Eikons as one of his administration's top priorities, van Darnus was swift to seize upon the opportunity. He approached his liege with a proposal for ridding Eorzea of its false gods once and for all, using House Darnus's closely guarded knowledge of Allagan relics to succeed where others had failed.[8]

After learning of his deployment to Eorzea, van Darnus knew his wait to further pursue his obsession with Project Meteor was over and seized upon the opportunity to appeal to the Emperor regarding the merits of resurrecting the project, claiming he had discovered a means by which to successfully control Dalamud. After enduring a decade-long stalemate on the Eorzean front, the aged Emperor, impatient to solidify his legacy before his death, had once again become willing to entertain the notion of a realm-wide "cleansing" of beastmen and their eikons. Thus the second phase of Project Meteor was commenced.[9]

In spite of repeated interference from both the Grand Companies of Eorzea and adventurers, including the infiltration of Castrum Novum, which housed the lunar transmitter, the destruction of the lunar transmitter, and the death of the White Raven himself, Project meteor seemed to be going along as planned, with the lesser moon beginning its descent into a direct collision course with Eorzea. With the denizens of now Eorzea praying to their gods out of desperation, Galvus's genocidal conquest of Aldenard seemed assured. During this time, the remnants of the VIIth Legion amassed at the plains of Carteneau, where Dalamud was expected to make landfall. It was only thanks to Gaius van Baelsar, legatus of the XIVth Imperial Legion, that the Eorzean Alliance learned of this plan, as the legatus had opposed the madness of both van Darnus and the aging emperor for enacting this dangerous plan for conquest.[10]

In the end, Eorzea was devastated by the machinations of the Garlean Empire, though not in the way that Galvus had expected it to be. Instead of crashing into Eorzea, Dalamud instead shattered from within above the land to reveal the elder primal Bahamut. Although the land was devastated by both fragments of the lesser moon and Bahamut's rage, the primal was subjugated by the Archon Louisoix Leveilleur before it could completely devastate the land.[11]

Although the Garlean Empire failed to conquer Eorzea that day, Gaius van Belsar and his XIVth Legion were able to use the the Eorzea's state of disarray to set up several outposts across the land in preparation for the future conquest of the severely weakened realm.[12]

Five years after the Calamity, Solus zos Galvus was still the official ruler, though there were rumors present that he was in frail health and had frequent illnesses.[13] His condition has caused political strife within the empire as to who will succeed him, leading to the official abandonment of the unified effort to conquer Eorzea. Gaius Van Baelsar, a general and Imperial Legatus in the Garlean Army, has instead decided to act independently and personally lead his legion to Eorzea without the formal support of the rest of the empire.

Not long after the beginning of the Seventh Astral Era, likely as Gaius was no longer present to oppose any challengers, a civil war has broken out in Garlemald over the succession to the throne after Galvus had succumbed to an ailment at the age of eighty-eight.[14] The conflict was eventually resolved with Galvus's grandson, Varis, crowned the new emperor.

The Emperor appears with an ice-elemental card.

Artwork for Final Fantasy XIV Online Anniversary.
Add a photo to this gallery

Sol is Latin for "sun". "Galvus" is derived from Latvian word galva which means "head".