The Solitary Island is a remote island in the World of Ruin of Final Fantasy VI. It is the starting point of the World of Ruin, where Celes awakens from a coma and begins her journey to find the rest of the Returners.

After the cataclysm several people washed ashore on the island, including Celes and Cid. Over time the survivors lost themselves to despair and leapt off the northern cliffs into the sea. Eventually only Cid remained, caring for a comatose Celes and spending his free time constructing a crude raft to one day escape the island.

A full year later, Celes finally awoke and Cid told her they were alone on the island. Cid had caught ill a few days ago, so Celes cared for him catching fish. Depending on the player's actions, Cid either lives or dies. If he dies, Celes goes to the northern cliff and attempts suicide, but washes up on the shore alive and recognizes an injured seagull that has been bandaged using Locke's bandanna. Celes realizes he must still be alive somewhere out there, and her hope is restored.

Upon returning to Cid's house, Celes discovers a letter from Cid informing her of a secret staircase by the stove. If Cid recovers, or when Celes reads his letter after he passes, Celes finds the secret staircase and in it the raft Cid had been working on. Celes departs the island on the raft to look for her friends and reaches the mainland near Albrook.

The Fish that Celes catches are kept as key items until she feeds them to Cid. There are four kinds, told apart by their descriptions. If Cid passes away, whatever fish are left swimming on the shore are the only kinds left, but if he lives, the player can continue to talk to him to make the fish respawn, and eventually obtain all four types permanently.

Once the player acquires the Falcon, they can pick up the Quetzalli magicite on the beach.

Fast-moving, healthy fish help improve Cid's condition, whereas the slow-moving rotten/foul-tasting fish deteriorate his health. The game keeps track of a counter for Cid's health, which starts at 120 and decreases by 1 every passing second, unless the player is in the menu screen or in a battle.

Feeding Cid fish lowers or raises the counter depending on the type of fish:

If the player feeds him multiple fish at a time, the effects of all of the fish count. The type(s) of fish in the water is reset every time the player talks to Cid.

If the player does not save Cid, there is no way to make the fish reset, because one needs to talk to Cid to do that. So the player will not be able to collect all four fish under the Rare Items within the Items menu.

After obtaining the Falcon, returning to the beach on the island allows the party to obtain the esper Quetzalli.

Later in the game, the Solitary Island can be returned to to farm Elixirs and Megalixirs. The Peepers and Land Rays that appear on the island die after one turn due to innate Sap status, but the Peepers have Elixirs as a rare Steal and the Land Rays have Megalixirs. Most other enemies that have one of these items to steal are either bosses or can only be encountered on the Veldt at this point, making the Solitary Island the optimal place to farm. The party will typically only get one turn to attempt to steal before Sap kills the enemies; casting Stop on them will delay Sap's damage and give the player more time.

The Solitary Island is the setting for a regular dungeon and is also featured in the Challenge Event Assassin in Black.

Celes wakes in a small hut on an unknown island to find that Cid has been taking care of her for an entire year. Now Cid has fallen sick and she must return the favor.

The quest to save Cid is the first instance of fishing in the Final Fantasy series, which would go on to become a recurring type of minigame. Yoshinori Kitase made the fish-catching game and designed it to be difficult by giving no hints as to which fish to give Cid, because he wanted the route where Cid dies to be the canon one. He yet thought it would be better to have a way of saving him. He placed the seagull on the beach even if it interfered with the fish-catching minigame to tie it to the scene where Celes throws herself off the cliff.[1]

Aside from a strong similarity in premise, there are also more specific details that parallel Future Boy Conan. Conan cares for his grandfather by catching fish; his grandfather had crashed on the island with other survivors that have since died and he espouses the belief he and Conan may be the only two humans left in the world; when Conan attempts to grab onto the plane that abducts Lana and falls off, he washes ashore on the island and is awakened by a seagull flying about him; when his grandfather passes away, the distraught Conan runs to a cliff on the island in his grief and collapses in tears. 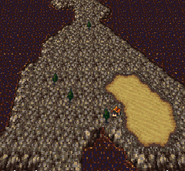 Solitary on the world map (GBA). 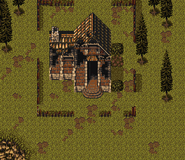 The cabin on the Solitary Island (GBA).

The Solitary Island on the world map (2014 mobile/Steam).

Celes waking up on the island.