A young woman who served as a dancer in the front lines during the war. Soleil's bewitching dances not only serve to comfort the hearts of soldiers on the field, but the different magical properties tied to each dance help unlock their innermost potential as well. In battle she wields the throwing weapon known as the chakram, though being a pacifist at heart she prefers to use it as a part of her dance routine rather than for hurting others.

Soleil is a summonable vision and optional playable character from Final Fantasy Brave Exvius. Originally an inhabitant from Ardra,[1] Soleil was born into a family of dancers whose job was to serve as support for soldiers on the battlefield.

When she finally learned the original purpose behind her unique skills, the grief she felt upon realizing that her passion was meant to be used as a tool of war then crystallized in form of a vision. Nevertheless, she served in the front lines during the war, using her dances not only to comfort the hearts of soldiers on the field, but to help unlock their innermost potential as well.

She has two variants: "Soleil" and "Divine Soleil", which was released for the Tomb Raider collaboration.

Soleil is 4-6★ Rare Summon, available for summoning since the exchange event The Auracite Chosen (in which she was a bonus unit). Her job is listed as Dancer and her role is Support. Soleil has no innate element or status ailment resistances. Her Trust Master reward is Miracle Step, a passive ability that increases the equipped unit's MP by 20%, its MAG and SPR by 10%, and raises its chance of evading physical damage by 5%.

Soleil is an effective buffer, being able to buff all stats albeit in separate abilities. Unfortunately these abilities last only one turn and cannot boost the party's stats for a large amount, until they are enhanced. At this point their effect last two turns and their boost base is 80%, potentially reaching 120% if the player can properly combo her dances alternating between a defensive buff and an offensive one (or viceversa). They also come with the added benefit of inflicting low stat breaks on enemies and have a very low MP cost.

Soleil's downsides however are her frailty as she lacks significant passive boosts to HP, DEF or SPR, although she makes up somewhat with decreased target chance and evasion (through enhancements) and several status ailment immunities. She also lacks MP restoration for the party and damage mitigation, and is thus easily replaceable by several 5★ base units who can. Nevertheless, despite being just a 4-6★ unit, enhanced Soleil is very useful.

Her awakening materials are the following:

Soleil's stats at her highest levels are as follows (with no passive abilities taken into account), along with the maximum amount of stat points that can be increased through pot-enhancements:

While Soleil has no innate status ailment resistances, her passive "Endless Turn" gives her immunity to Sleep, Paralyze, Confuse and Petrify.

Dance of Glory (栄光の舞踏, Eikō no Butō?) is Soleil's Limit Burst. It is a debuff-type ability, as it is able to inflict Charm to all enemies, should they be vulnerable and renders them unable to take action for one turn.

The chance of infliction will depend on Soleil's LB level:

She can equip the following armor types: hats, clothes and robes.

Soleil has a exclusive materia: Healing Waltz II, which enables the user to cure poison, blind, sleep, silence, paralyze, confuse, and disease to the whole party at the cost of 20 MP. It was available during the Auracite Chosen event. She also has an exclusive-effect weapon: the Battle Hoop throwing weapon (ATK+50, DEF+20) which grants her the passive Graceful (decreases her chance of being targeted by 10%). It was also available during the Auracite Chosen event. 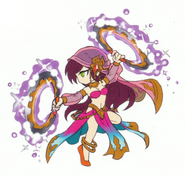 Divine Soleil is a Global-exclusive 4-6★ Rare Summon, available during the Tomb Raider-based raid, Tomb of the Silversmith (which originally ran in March 2018 in the Global version). Her job is listed as Goddess, and her roles are Healing and Support. Her Trust Master reward is the accessory Ankh of Goddess (DEF+3, HP+15%, SPR+15%), which enables the equipped unit to use the ability Blessing of the Lifegiver (cast 30% HP Auto-revive on self for two turns).

Soleil means "sun" in French. It is not commonly used as a name in France itself.