A carefree young lad living in the small, peaceful kingdom of Lux, Sol, with his brash nature and hot head, often gets into trouble with the surrounding townsfolk. No one is spared from his antics, least of all his childhood friend, Diana, with whom he is always arguing about something or other. His dream has always been to serve as a soldier of the Avalon Empire and ride on one of their fabled airships.

Sol is a playable character in Final Fantasy Dimensions. He is a boy from the small country of Lux, and is childhood friends with Diana and Glaive. He dreams of becoming a soldier of the Avalon Empire and flying an airship. He is one of the four Warriors of Light chosen by the crystal of Lux.

Sol has shaggy light brown hair and clear, pale eyes. He is depicted with brown eyes in his sprite. He wears a white vest over a baggy brown shirt, held with a black belt round his waist, white arm wraps, white trousers and white sandals. The color dominant in his various job attire is red.

Sol shares many similarities with Bartz Klauser, the protagonist of Final Fantasy V, including his carefree, down to earth personality. His map sprites also resemble Bartz's, with slightly different hairstyle and colors.

If your head was any thicker, they could use it to fortify the castle walls.

Sol is a good man at heart. He is carefree, but can be thickheaded and brash, much to the annoyance and amusement of his friends. His insensitivity makes him unknowingly hurt others (including Diana), but his kind nature helps him meet better ends. Sol has a good sense of right and wrong and will not hesitate to protect those dear to him.

A strong, hot-headed youth from the small kingdom of Lux. Dreams of riding an airship.

While traveling across the forest to the Checkpoint to welcome back Aigis, Sol sees an Avalonian airship fly over Lux before being surprised by Glaive's attack. After the fight, Diana joins the two and Sol learns they, too, want to welcome Aigis back. When they reach Lux, Sol unknowingly hurts Diana's feelings before he joins her in infiltrating the castle to find how the reason Aigis was being called there. Sol and party later join Aigis on a mission to check on the crystal of Lux. Along the way, they meet a wandering prophet named Elgo. In the crystal chamber, the guardian of the crystal defeats Sol, and later four people appear with the mission of stealing the crystal.

After a huge explosion, Sol is separated from Glaive and Diana, and is joined by Dusk and Sarah. He learns that he, Sarah, Dusk, and Aigis are the Warriors of Light. The warriors travel with Elgo to Lux, only to find it gone. They decide to travel to Castle Liene. Along the way, Sarah and Dusk reveal that they were sent by Avalon to steal the crystal.

Sol comes equipped with the Counter ability, which carries 50% damage output than standard Attack. This, combined with his general physical stat growth, leans him toward physical jobs, such as Monk, Warrior and Dragoon. However, since the stat differences between characters are minimal, and abilities and equipment are of greater importance, he can competently do any job. Jobs also gain stats boosts when they level up, which helps even out stats. 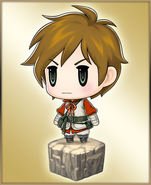 Sol appears on a card depicting his official artwork. His card is played as a forward, with a fire crystal point and two other crystal points needed to play him. He has the title of light warrior, and his description states that if another light warrior besides Sol is controlled, Sol gains the abilities haste and brave and when Sol receives damage from another forward, half the damage done to Sol is then returned back to the opposing forward.

Sol with Diana, Glaive, and Aigis.

Sol with Sarah and Argy 2.

Sol as a Warrior.

[view · edit · purge]Sol is the Latin and Spanish name of the main-sequence star of the synonymous Sol System, called the Sun in English. This refers the character's role as a Warrior of Light.