Cid Pollendina: Oh, shut up and help me remodel the Sochen Cave Palace page!
Please expand this article into a full one. The following tasks need to be completed:

... Hey, you sure this rabbit hole's really the way into Archades?

The Sochen Cave Palace is a location in the land of Ivalice in Final Fantasy XII. It is an underground network of caves and broken down palaces that provide a passageway to the heart of the Archadian Empire: the Imperial City of Archades.

Sochen Palace is an ancient palace overrun with undead, bats, imps, and other dangerous creatures. The only royalty currently residing within the temple are a family of mandragoras who have caused problems for hunters in the Archadian wilderness. Several ancient and powerful creatures are locked away in the depths of the cave palace.

A giant underground complex in Archadia, consisting of natural caverns and the abandoned ruins of an ancient palace. Many of its ways and passages remain uncharted on current maps. From the style of the carvings adorning some of the walls, it is thought that the complex was built at some point during the Galtean Alliance, though no records of its construction remain. A survey mission was initiated to chart the many corridors here, but a particularly nasty infestation of creatures has significantly hampered progress.

The party is on their way to Archades on foot to avoid detection and must travel through Sochen Cave Palace to reach the city. Talking to the Archadian Wayfarer in the Tchita Uplands gives them a key needed to unlock the door to the palace. Inside they battle and defeat the five mandragoras. After defeating the mandragoras, they proceed through the labyrinthine cave until they battle a ghost called Ahriman who can copy itself. Defeating the monster, they proceed to the elevator and arrive at Old Archades.

The Sochen Cave Palace is located just to the northeast of Tchita Uplands and gives access to Old Archades.

In the Zodiac version, all treasures are different. The common treasure is Hi-Potion but with the Diamond Armlet, they may be a meteorite. The Koga and Iga Blades are no longer found from the waterfall puzzle, the treasure being a Megalixir instead. There is a Sakura-saezuri ninja sword and the 1000 Needles technick in the Falls of Time. The big yield of the area is the Zodiac Escutcheon shield in the room where the Hell Wyrm is fought, but there is only a 1% chance for it to spawn per entry.

Mirror of the Soul[]

Hall of the Wroth God[]

Chests in this location do not respawn. The Zodiac Escutcheon is a rare treasure that appears randomly in the Zodiac versions to the opposite side of the room from the door the player enters, so it is easy to see if it has appeared or not. The player can zone in and out of the room waiting for it to appear; the 4x mode in The Zodiac Age makes it faster.

An Archadian noble on the Tchita Uplands gives an unofficial hunt to hunt down the Mandragoras inside Sochen Cave Palace. They use deadly status ailments that don't miss: Confuse, Blind, Disable, Slow, Poison, Sleep, Sap and Silence. It is best to equip Nishijin Belts to avoid Sleep and an "Ally: any (>) Remedy" gambit is priceless. If these options are not available, an "Ally: status = Sleep (>) Esuna" is just as effective, since Sleep is almost always inflicted along will the other statuses.

Each Mandragora has its own elemental weakness that can be exploited. It's better to focus on them one at a time, though they tend to run away at low HP. The Mandragoras can take off quite a chunk of HP with their physical attacks while in groups. It is possible to Dispel their Haste, and one can set up a "Foe: status = Haste (>) Dispel" gambit for quick removal. The Mandragoras have a pattern where they rush into the party to cast status effects and attack, then run away and cure, but they will always move in a group.

The best way to defeat them is to wait until they are grouped together and chain a Quickening on them. The player should stay on one side of the room and wait until they run toward the party, grouped. A well-aimed Quickening chain can totally pulverize the group quickly. The player should kill the Pumpkin Star first, because it casts Confuse. It is best to manage the party well and not let the party members mindlessly run around the room.

Mandragoras are hard to steal from, but the items they hold are nothing special, although the Onion from Onion Queen can be sold to make Megalixir in the bazaar.

After defeating the Mandragoras, the party can join the Rare Game hunt club on Phon Coast after the storyline events in Archades.

The Darksteel is a Rank IV Mark whose hunt becomes available upon reaching Archades. The Darksteel can be found in the Temptation Eluded area and all of the other enemies will be cleared out when the player enters it. It is petitioned by the Homesick Man in Archades's armor shop.

The Overlord is a Rank VI Mark whose hunt can be undertaken after the events in the Draklor Laboratory. The Overlord can be found in the Doubt Abandoned area of the Sochen Cave Palace. The Insecure Seeq assists the party in battle, but he falls in one shot from Overlord's Pyromania. The seeq is the petitioner, found in the Technick shop in Archades.

To find Anubys the player must have spoken to the "Huntmaster" in Phon Coast and defeated Thalassinon, which will trigger the start of the Rare Game quest. Anubys then appears in the secret room that does not appear in the map, called Mirror of the Soul. The player has to complete the waterfall puzzle (see below), and once the player reaches the room, Anubys will drop down.

To find Wendice the player must have spoken to the "Huntmaster" in Phon Coast and started the Rare Game quest after defeating Thalassinon. The player then has to kill three or more Wendigos before the Wendice will spawn. After killing the required number of Wendigos, it will spawn in the center of Destiny's March. The easiest way to do this is to run around the diamond shape of Destiny's March killing all the Wendigos around, and soon a red dot shows up in the center. It seems that the player has a certain amount of time to kill the Wendigos, so it is best not to waste time running around.

A powerful ninja sword can be found behind the Pilgrim's Door in the original version (Knot of Rust if Diamond Armlet is equipped). In Zodiac versions, the treasure is a Megalixir as Koga and Iga Blades have been moved elsewhere.

The player should start within the Falls of Time area and travel through the southeast-most door and proceed clockwise following the pattern in the picture. While following the path, each time one enters into the Falls of time area a message appears that the waterfalls have changed their course. At the end, the player will receive the message "You hear a door open in the distance". From then on it doesn't matter what order the player enters or exits the Falls of Time area. The process is shown in this video.

The Ascetic's Door is located at the westernmost wall of Destiny's March. It is recommended the player enter this area later because it holds more difficult enemies than the rest of the Sochen Cave Palace area (namely the Hell Wyrm).

The player should begin by entering the easternmost chamber from the caves to the east, then proceed clockwise around the diamond shape until one arrives again at the eastern chamber. Upon completing the route once will give the message "You hear a door open in the distance".

Enter the chamber in the end, the player needs the Age Worn Key from the Wyrm Philosopher side quest.

Hell Wyrm is an optional boss reached if the player opens the door to its lair with the Age Worn Key. The player must have already defeated the Vyraal Hunt #21: Get My Stuff Back and received the key item Dragon Scale. The player must then search Windmill #10 in Cerobi Steppe (located in the Northsward) to trigger a scene with the Wyrm Philosopher who will trade the Dragon Scale for the Age Worn Key.

The battle against Hell Wyrm can be considered a prelude to the battle against the game's superboss Yiazmat. The battle can be abandoned at any time, and the Hell Wyrm's HP stays at the point where the player left it. It is weak against Holy-elemental damage and absorbs the Dark element, the opposite of Yiazmat. Level 55 or higher is a good level for fighting Hell Wyrm.

The map can be found on the right side of the Mirror of the Soul area.

The track of the Sochen Cave Palace is played in the Mote Dungeon selection screen and the bosses of all this dungeons are the Five Mandragoras. 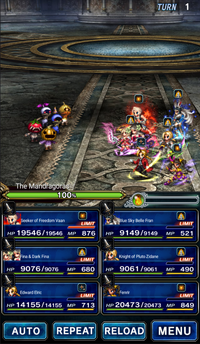