Serah's fiancé. Though thoughtless at times, and a bit rough around the edges, he has a positive outlook that wins him many friends. He remains determined to help Serah no matter the odds.

Snow is a playable character in Final Fantasy Record Keeper. A standard character, Snow can be recruited as a First Time Reward for completing the Record of the Hanging Edge on Classic difficulty. During the Challenge Event Chasing Hope, Snow was a Tier 3 character acquired at the event's Hanging Edge, Part 1 stage, also on Classic difficulty. Snow has also appeared in Dangerous Beauty as a supporting character.

Snow has been cast as a Monk, albeit one with shades of a Knight. He is built to deal heavy damage from the front rank as well as to function as a tank; all three physical stats are among the highest in the game. Despite his occupation, Snow cannot use magical abilities; even though he has Mediguard, pairing him with a strong White Mage will be key to his success in battle. Many of Snow's skills center on the element of ice, which can be an advantage against insects, fire-beasts, and other things that hate the cold.

His default Soul Break is Mediguard which at the expense of one Soul Gauge segment grants 35 second long Protect and 30 second long Regen on the user.

The light armor Wild Bear (XIII) allows Snow to use Froststrike which at the expense of one Soul Gauge segment deals ice damage to one target with 480% of a conventional physical attack.

The fist Paladin (XIII) allows Snow to use Sovereign Fist which at the expense of one Soul Gauge segment deals two successive physical attacks to all targets, each hit having 175% damage potency of a conventional attack totaling for 350% total damage potency, with a moderate chance to interrupt their actions by inflicting Stun with 20% chance.

The fist Power Circle (XIII) grants Snow the Super Soul Break Diamond Dust, which for one Soul Gauge segment deals four physical ice-elemental spread strikes against all foes, then raises the party's Defense by a moderate amount. Upon its mastery, Snow's Attack is permanently augmented by 10 points.

The light armor AMP Coat (XIII) grants Snow the Burst Soul Break Here we go!, which for one Soul Gauge segment deals eight hybrid ice/non-elemental attacks to a single target, grants all allies Last Stand, and grants Haste and Burst Mode to the user, with damage dealt increasing if no allies are KO'd. 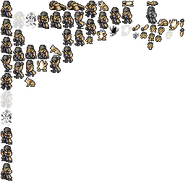