Snow's default costume, "Patron of Yusnaan", is his Lightning Returns: Final Fantasy XIII attire, in which he appears as the patron of Yusnaan. Snow has straight shoulder-length hair and a small goatee. He wears a formal black suit with matching gloves and boots, and the engagement pendant he had given to his fiancée Serah. In battle, his left arm is engulfed with a monstrous Cie'th arm. The first alternate coloration is similar to the colors of his original attire from Final Fantasy XIII. His jacket is off-white, his pants are gray, and his boots are a lighter shade of gray, while the buttons, pockets, and epaulets on his jacket are brown. In the second alternate coloration Snow's jacket is red and patterned with leopard print, his pants are black, and his boots are dark gray.

The first alternate costume is "Wild Bear", Snow's main appearance in Final Fantasy XIII. His hair is neck-length and he wears a black bandanna. He wears a beige trench-coat over a zipper shirt over a black vest, and baggy black pants, gloves, boots, and a blue patterned sash over his leg. The emblem on the back of his coat is his default weapon "Wild Bear" from his original game, though for gameplay purposes it is merely part of his costume, as his monstrous Cie'th arm functions as his weapon. In the first alternate coloration his overcoat has a camouflage pattern, he wears an olive-colored shirt over a white vest, his pants are black, his boots are brown, and his scarf is yellow. The second alternate coloration recolors his overcoat green, his pants dark brown, his boots black and gray, his scarf red, and his shirt olive-colored with yellow stripes over a white vest. This alternate coloration resembles that of his party member Sazh Katzroy from Final Fantasy XIII. 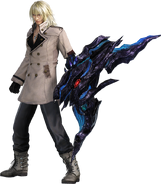 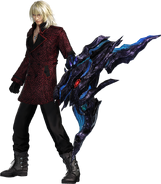 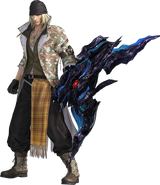 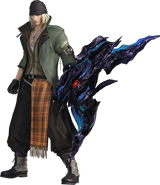 Having been summoned around the time of the events of Lightning Returns: Final Fantasy XIII, Snow has a melancholic and threatening aura around him, a far cry from his usual self. Accepting that they need to fight, Snow is willing to face Lightning despite her refusal to, and will not tell them Odin's location before fighting her and Squall.

At the end of their encounter, Snow shows a bit of his old self, telling Lightning that if she can trust Squall, he will as well, and tells her that he will be seeing her.

Snow's weapon is his left Cie'th arm, which grows and further alters Snow's appearance depending on how much damage he incurs.

The default weapon is the Crystal Guard, a form Snow unleashes when fought in Lightning Returns: Final Fantasy XIII. The overall appearance resembles his Snow Villiers+ form, minus the extended spikes that would appear over his shoulder. His first alternate weapon is the Ghastly Guard, based on Pulse Cie'th, and specifically resembles the arm of a Ghast. The second is the Sacrificial Guard, based on Sanctum Cie'th, and specifically resembles the shoulders of a Sacrifice. This also bears some similarity to Cid Raines's Cie'th form. The third alternate weapon, the Glacial Guard, is an original design distinct from any Cie'th in Final Fantasy XIII, and resembles ice, alluding to Snow's summon Shiva and his overall affinity with the element.

Like Kam'lanaut and Vayne, Snow was absent when Spiritus summoned his warriors to confront Materia’s champions.

Lightning and Squall encounter Snow wandering aimlessly in Eden where Snow asks Lightning what is going on and how they're supposed to get home. Lightning explains the only way is through fighting, and he asks if she has come to fight him. Lightning questions why Snow of all people has been summoned by Spiritus, and Snow tells her to do what she has to, but she refuses. Squall intervenes, scoffing at the situation before demanding Snow tell him where the summon nearby is. Snow challenges them, but Odin appears before they can fight. Lightning and Squall defeat Odin and Lightning runs up to Snow and promises she'll find a way to get everyone, including Snow, home. Snow says he gets it and tosses Odin's crystal to Squall, stating that if Lightning can trust Squall, so can he. Snow leaves through a portal, telling Lightning he will see her later.

Snow takes part in the final battle against Shinryu, and it is presumed he imbued his memories into a crystal, giving Spiritus a doppelgänger of himself to use, and was sent home with Lightning.

Type: Vanguard - Snow transforms into a powerful Cie'th when his HP gets low, boosting the impact of his bravery attacks, HP attacks, and unique EX skills. Even if he recovers HP, he will not lose his Cie'th status until incapacitated.
EX Skill: Chaos Geyser/Sanctify/Damnation/Annihilation - Unleashes a mighty shockwave. The further along his Cie'th transformation, the more he can charge attacks.

Snow Villiers was revealed as the sixth and final DLC character of the Season Pass on January 28, 2019.