Snow Lion is an enemy in Final Fantasy VIII fought on the Trabia continent. It appears as a large, sealion-like monster with huge fangs made of ice.

Lives in the northern snow fields. Takes time to defeat because of its high HP. Uses Ice Breath when angry.

Snow Lion attacks with Ice-elemental moves, such as Ice Breath. Snow Lions have a lot of HP and their physical attacks can be quite powerful, but this is offset by having three elemental weaknesses.

Junctioning Fire to Elem-Atk-J and casting Demi are very effective. Its is also vulnerable to the Doom status, which makes for a quick kill. 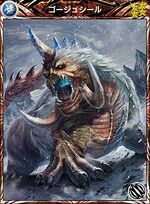 Ice Breath.
Add a photo to this gallery

The Snow Lion is a celestial animal of Tibet. It is the emblem of Tibet, representing the snowy mountain ranges and glaciers of Tibet, and may also symbolize power and strength, and fearlessness and joy, east and the earth element. It is one of the Four Dignities. It ranges over the mountains, and is commonly pictured as being white with a turquoise mane.

Retrieved from "https://finalfantasy.fandom.com/wiki/Snow_Lion?oldid=3231863"
Community content is available under CC-BY-SA unless otherwise noted.