The Snow Cave is a location from Final Fantasy II, where the Goddess's Bell, a relic required to access the Sunfire, is located. The cave is only accessible via the Snowcraft.

On the way out the heroes are confronted by the traitor Borghen. They defeat him, but as he dies, he triggers a trap mechanism which sends a boulder hurtling toward them. Josef holds back the boulder while the others get out of the way, but he is unable to save himself as the boulder crushes him.

The background music inside the Snow Cave is the Final Fantasy II "Dungeon" theme.

Firion's next mission is to destroy the airship Dreadnought. To do that he will need the Goddess's Bell to enter Kashuan Keep. The team heads for the Snow Cavern where the bell is hidden.

Josef and Firion's team succeed in obtaining the Goddess's Bell within the Snow Cavern, but someone waits for them on their way out...

Defeat Borghen without being KO'd. 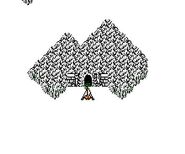 The Snow Cave on the World Map (NES).

Beavers within the Snow Cave (PSP).