Cid Pollendina: Oh, shut up and help me remodel the Snow (World of Final Fantasy) page!
Please expand this article into a full one. The following tasks need to be completed:This request can be discussed on the associated discussion page. Remove this notice upon completion.

Snow is a minor character in World of Final Fantasy. He is a Grymoirian incarnation of Snow Villiers originating from Final Fantasy XIII. Snow is one of the four character representatives of the Final Fantasy XIII series, the other three being Lightning, Chocolatte and Serah (the latter appearing only in the Maxima version).

Notes: Ribbity-rib-ribbit! / Nice bandana, bro / Kind of an airhead / Kind of a hothead / Always ready to fight for someone

Toad-Cursed
Snow couldn't contain his curiosity when he saw a shiny golden toad. But when he tried to pick up the thing, blam! Toad-cursed. The first thing he thought after being toadified wasn't how to turn himself back, but if he could deal with eating flies. Classic Snow.

Flandemonium!
This isn't the first Snow who's run into trouble with a rogue flan. Maybe it's just his destiny. In any case, no matter how absurd the circumstances this time, he's still dead serious about stopping his wobbly nemesis once and for all.

Is Lightning Snow's Sister?
Snow called Lightning "Sis," but are they related? Well, not by blood. But as you may have guessed, Snow and Lightning's relationship here is essentially the same as it was in their original world.

Unfortunately, Lightning's younger sister doesn't make an appearance this time, but perhaps one day she'll rise as a Champion and you'll have a chance to meet her.

Not a Summoner?
Snow has the ability to summon a special Mirage, Shiva-Ixion. And yet, he insists that he isn't a summoner.

Summoners are individuals who open pathways to other worlds, then use their magic to form pacts with Mirages. However, Snow is different. Unlike a summoner, Snow was given a power—some consider it a curse—that turned his left arm into a sort of magical instrument. Channeling magic through it, he made a pact with Shiva-Ixion.

In Snow's original world, this would brand him as a l'Cie; however, there are no fal'Cie in Grymoire. Still, he must have obtained this power in a fundamentally similar way.

Snow joins the party during Chapter 12, "Ribbit Jiggle Panic", after the twins remove a curse that turned him into a toad. With his help, he and Shiva-Ixion create ice bridges in the marshy waters of The Windswept Mire to allow the twins to leave the swamp. As with most Grymorian versions of main characters from the Final Fantasy series, Snow does not participate in battles, only simply accompanying the twins on the field. Snow leaves the party after the player defeats the Golden Flan.

The player can take on Intervention Quests that center around Snow.

As a Champion, Snow can be summoned to assist Lann and Reynn in battle. Upon acquiring Snow's Champion Medal, the player can summon him to attack all enemies with the ability Sovereign Fist. The party is also bestowed with

In the Maxima version, Lann can take on the appearance of Snow by equipping

Snow's Champion Jewel. In doing so, he inherits the abilities

An arrangement of "Snow's Theme", "Prismelody: Snow -C-" plays when using Snow's Champion Medal. The player may select this theme as the background music for battles from the Config section of the main menu, labeled as "Champion Theme: Snow". This theme also plays in battles in Maxima version when Lann is equipped with Snow's Champion Jewel. 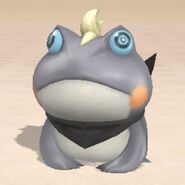 Snow as a toad.

Snow is precipitation in the form of flakes of crystalline water ice that falls from clouds. Since snow is composed of small ice particles, it is a granular material. It has an open and therefore soft, white, and fluffy structure, unless subjected to external pressure. Snowflakes come in a variety of sizes and shapes.