Snow is a playable character in Final Fantasy XIII who specializes in Ice-elemental attacks and his Eidolon is the Shiva Sisters, whom he can ride as a motorcycle in Gestalt Mode. He fights with his fists, his attacks being augmented by his AMP coat. Snow excels in defense, attracting all enemy attacks to himself as a Sentinel, able to withstand the onslaught with his high HP. His signature attack is called Sovereign Fist.

Snow resembles the Monk class of past games by fighting bare-handed, dealing high damage and having the best HP growth. Snow's primary strength is in his defensive abilities, and he has the third highest Strength. He is not incompetent in the magical department, however, with many useful spells available to him. Snow's attacking and casting speeds, especially the latter due to having two hands with which to cast his spells, are slightly better than the other party members'. The player may want to focus on either Strength or Magic to bias his attack sequences for the AI. The only thing he does worse with a magic build compared to a physical build is generally less damage as a Commando.

Snow's weakness is that he is almost completely outclassed by Fang, who learns all but two (Curasa and Blizzaga) of his non-Synergist abilities, and has better Strength and Magic, though less HP. Snow's main niche is having the fastest animation speeds, but the lack of Commando siphon abilities implies a speed-focused Snow was not an intended build. Sentinel is not among the most useful roles for most of the game, and Fang can do it when needed while being more useful overall. However, Snow comes to his own late-game with upgraded weapons when the player no longer needs to worry about class restrictions, and having some of the fastest animations across the board becomes useful.

Snow is the only party member to have the exclusive Hand Grenade ability, usable in the first two chapters. He's the only character whose Crystarium automatically updates at the end of Chapter 3, and is the only character to completely outclass another in terms of base stats, with his HP, Strength, and Magic all surpassing Sazh's at maximum Crystarium growth. His victory pose is to pause for a moment and then pump his fist.

As a Ravager, he learns all Ice and Water abilities, but can also learn Wind magic up to the -"ra" level. He learns Vigor, making him potentially the best endgame Ravager considering his fast casting animation.

As a Commando, he lacks the Siphon abilities, but his high Strength makes him deal a lot of damage, and his high HP will usually keep Adrenaline active. Snow's full ATB skill is Sovereign Fist, which clears the enemy's stagger gauge when executed. It tends to be slightly stronger than Fang's equivalent, Highwind, but once both are hitting the damage cap, they function the same.

As a Medic, Snow learns the same four spells Sazh does. Curasa allows Snow to be a serviceable Medic since Magic does not affect it much. Snow is one of only three party members to learn the useful Daze spell as a Saboteur, and Curse, Pain, Fog, and Slow are all good spells to have as well.

Snow's weakest role is likely Synergist, as his skillset is ordinary and he learns them late. He is denied the Bar-, En-, and -ra spells. 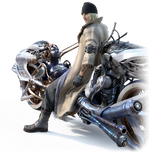 Snow's Eidolon is the Shiva Sisters: Stiria and Nix. Stiria is the dark-skinned elder sister. Nix attacks the enemies with mostly physical attacks, while Stiria wields powerful ice and healing spells. They can combine into a motorcycle for Snow to ride on for their Gestalt Mode.

Snow is the only playable character who fights his Eidolon alone. He also doesn't help any other party members fight their Eidolons.

Snow's weapon uses AMP technology to enhance his powers. Although it changes the appearance of his coat when in battle, the coat itself is not the weapon. The coat augments the wearer's strength depending on which emblem set is sewn onto the back (the emblems only appear during combat). Snow's weapon is the only one that cannot subtract or change form.

There is a glitch in the game that renders Snow's weapon outside of battle, letting him have a "different" coat on the field. If the player kills a beast on a mission with another character's Eidolon and the summoning is executed while the beast is attacking Snow, Snow's weapon stays on him, even on the field.

Umbra has "Improved Ward" that augments the skills Deathward and Fringeward abilities, but these are rarely triggered. It also has "Magical Wall", but its benefit is negligible. It also has low stats.

Feymark makes Snow a magic-oriented character with high Magic at the cost of "Enfeeblement" and ability to synthesize "Magic Damper", making Snow immune to all magical attacks. However, physical attacks still hurt, healing magic will have no effect on him, and it would require equipping four Magistral Crests.

Rebel Heart offers "Critical: Power Surge" and "Low HP: Power Surge" by keeping Snow's HP low. Its low stats may be only a minor problem since one is supposed to multiply the damage via the "Power Surges", but it's not easy to get Snow's HP into the specific range as the party starts each battle at full health, and the player can't switch to a paradigm with any AI-controlled Medics.

Unsetting Sun is Snow's "Stagger Lock" weapon, but it has low stats, lower than what the Power Circle can give.

Sacrificial Circle has "Paper Tiger" that cuts his HP by 40% in exchange for the highest total stats. Even though it's Snow's highest Strength and Magic weapon, it is recommended to use his Power Circle over it, as its Strength stats are similar and Snow will not have the -40% HP penalty.

Snow is a playable character in chapters 1, 2, 3, 7, 9, 10, 11, 12, and 13. He is the only Sentinel for the start of the game, but after Fang joins in Chapter 7, she pretty much outclasses him by being a better Commando while still being a competent Sentinel. Snow is the better Ravager of the two, however. He cannot be used in battle in the end boss battle for Chapter 7, or in most of Chapter 9, but at the end of the latter, the player gains the ability to freely configure their party, at which point they can again deploy Snow. If used as the party leader in the Archylte Steppe, the player can ride a chocobo as him and look for hidden treasure.

Snow is a mandatory party member for the following boss battles:

Snow was seen using AUG role, which presumably stands for "augmenter", bestowing positive statuses on the party. The role's color was the same as is Synergist's, implying that at some point during development, Snow might have been intended to have Synergist as one of his main roles.