Sniper (スナイパー, Sunaipā?) is a recurring weapon originally from Final Fantasy VI. It is typically a throwing weapon.

Sniper has an attack power of 172, and can be purchased in Jidoor in the World of Ruin for 15,000 gil, or won in the Dragon's Neck Coliseum when betting Wing Edge or Dragon Claw. As a thrown weapon, it can be equipped by Locke and is a long range weapon. It has 50% chance of dealing 300% damage to floating targets, or 150% damage to non-floating targets.

The Sniper's design in Final Fantasy VI is based on the gunstock war club, a weapon used by Native Americans in the 18th and 19th centuries. Like the Sniper, the weapon was either swung or thrown in combat. Another weapon in Final Fantasy VI, the Hawkeye, also has a similar design.

Sniper has an attack power of 87 and a hit rate of 20. It is a Wind elemental weapon that ignores range and is effective against machine enemies. 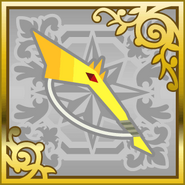 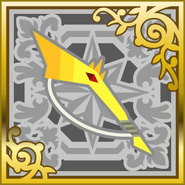 [view · edit · purge]A sniper is a highly trained marksman who operates alone, in a pair, or with a sniper team to maintain close visual contact with the enemy and engage targets from concealed positions or distances exceeding the detection capabilities of enemy personnel.

Weapons
Retrieved from "https://finalfantasy.fandom.com/wiki/Sniper_(weapon)?oldid=3304861"
Community content is available under CC-BY-SA unless otherwise noted.