Releases a cloud of thick smoke when thrown. Allows the party to escape from battle.

Smoke Bomb (けむりだま, Kemuridama?) is a recurring item in the series. It allows the party to escape from battles at a 100% rate, if escapable, and acts similarly to the ability Smoke.

Can escape from opponents during battle

Inflicts damage and darkness on all enemies.

Smoke Bomb is an item used with the Use command. It damages all enemies and inflicts Darkness for 8 turns. It can be stolen from Alcyone, Condor, Garuda, Pteryx, Stratoavis, and Zu or bribed from Condor, Garuda, and Simurgh.

Smoke Bombs are recurring key items, used in the quests

Stirring up Trouble, and

Long-favored by ninjas, this handy device instantly creates a cloud of smoke that can obstruct the vision of all but the sharpest-eyed of foes. Most commonly employed to distract the enemy and allow the wielder to escape in a pinch, some add foreign substances that cause watering eyes, coughing, and other adverse effects to the inhaler. 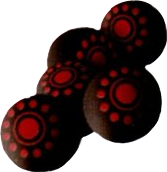