A compact sentry weapon manufactured by Shinra's Advanced Weaponry Division. Its gyroscopic control system enables the unit to track and engage intruders from the air at high speeds.

Slug-Ray is an enemy in Final Fantasy VII Remake and "Episode INTERmission". It is a small flying drone that uses firearms for physical damage and energy fields for magical damage. They first appear at the Corkscrew Tunnel during Chapter 5, "Dogged Pursuit", and appear in other locations through the game. In "Episode INTERmission", they appear in Shinra Building's Advanced Weaponry Division.

Slug-Ray (Ranged) is also a flying ranged unit in the Fort Condor minigame in "Episode INTERmission".

Physical attacks rapidly fill its stagger gauge. If dealt a certain amount of physical damage while airborne, it will crash to the ground.

All Aboard for Sector 4, Find Stamp

Physical attacks rapidly fill its stagger gauge. If dealt a certain amount of physical damage while airborne, it will crash to the ground.

The Slug-Ray is a flying drone that provides support fire for other units. It will mostly stay in the air hovering around their targets and firing its machine gun. One of its attacks is Luminous Blast, a charged shot that stuns the target unless they're blocking. The Slug-Ray's most dangerous attack is Electro Charge, where it'll hover next to its target while encasing itself in an expanding energy field, which deals heavy damage on contact.

If the Slug-Ray takes enough damage, it'll fall on the ground and be vulnerable to attacks, but may also retaliate with Spearhead, where it'll leap on its target and shock them.

Much like the vast majority of mechanical enemies, the Slug-Ray is weak against

Lightning. While in hovering mode, it is also weak to

On the hard difficulty, the Slug-Ray will use Luminous Blast and Electro Charge more often. It'll also remain airborne for longer and maintain distance.

The Slug Ray-can be a difficult opponent to pin down with Cloud and Tifa, as they'll try to maintain distance. However, it can be easily pressured with lightning magic, which is the best way to defeat it quickly. Barret can also instantly pressure the Shock-Ray with Overcharge and Focused Shot.

In "Episode INTERmission", Yuffie can quickly dispose of the Slug-Ray with Throw and Lightning Ninjutsu. Her superior air-speed and ranged abilities can pressure it easily. 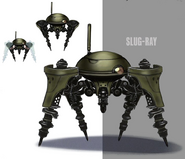