Slot (スロット, Surotto?) is Selphie's Limit Break in Final Fantasy VIII that selects a spell and the amount of times it will be cast using a process based on Selphie's level, Crisis Level and a random factor. Targets are selected at random. Slot does not use up stocked magic. If an undesirable spell comes up, the player can "do over", and the process is repeated to select another spell. The player can do over infinitely, but the battle will continue even if the player has set the ATB Mode to "Wait" in the config menu.

As it is random whether the player ends up with good spell combinations or not, they can equip the Defend command to Selphie when fighting strong enemies that use only physical attacks, such as T-Rexaur and Wendigo. While in HP Critical they can put up the Defend command making Selphie immune to physical damage. The effect will not wear off until the next command is chosen, so on her next turn, Selphie is free to shuffle through Slot for as long as is needed.

To calculate the Slot Level:

While the player can influence the Slot Level via Selphie's level and her Crisis Level, the next step, Slot Mod, is random.

The game has a list that determines which SpellSet is used depending on the SpellSet's value.

After the set is selected, the game picks a spell from the set, which is what Selphie is able to cast. The numbers are maximum amount of casts; the actual amount of casts is anything between one and the maximum.

While most abilities are standard spells the player can cast normally, there are four spells which are unique to Slot. These spells can only be cast once per Slot usage.

Further diving into the game code reveals two other spells specific to Selphie, Percent (a reduce-HP-to-1 move similar to Matra Magic), and Catastrophe (major damage to all enemies). These two spells were removed from Selphie's spell list in the final build of Final Fantasy VIII, but can be found via third-party data exploitation programs, although they just use Fire's spell animation. 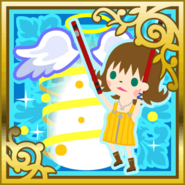