Random ability based on slot reel
Slot is Setzer's special command in Final Fantasy VI. It spins three slot reels, which the player stops one by one. The outcome determines the attack Setzer uses. All custom Slot attacks are unblockable and deal damage based on Setzer's Magic stat (meaning leveling him up with magicite that boost Magic is benefiicial).

In versions of the game with auto-battle (2014 and onwards), when Setzer uses Slot during auto-battle it randomly chooses an effect, meaning there is a small chance every time he acts that he will give an instant Game Over with Joker's Death.

There was a programming issue the creators of Final Fantasy VI likely couldn't solve with Setzer: by pausing and unpausing the game while the reels are spinning, the player could easily align whatever combination they wanted, seeing what was coming up next (in the mobile/Steam version, the player can no longer pause the game during the Slot). Therefore, the reels are usually heavily rigged against the player. If the random number generator (RNG) lines up, there is no way to get 7-7-7 for Joker's Death. The RNG is against the player's favor, with a measly 10/255 chance to succeed. Furthermore, all abilities besides Mysidian Rabbit, Prismatic Flash, and Joker's Death (7-7-Bar), have a chance of not appearing depending on the RNG.

It's easy to manipulate the RNG. The game uses a table of pre-randomized values from 0–255 that change whenever specific animations are played. For example, whenever the animation of Curaga is played, the hexadecimal value Slot pulls from will increase by 38. If Curaga is used with the assumption that the Hex value is at 0, this will allow the use of Mega Flare, Summon, and Dive Bomb. However, the player will still have to press the button at the right time to stop the spinning reels, which isn't a problem by pausing and unpausing the game during the spinning.

The index that Slot pulls from to randomize what's available always starts at 0. By knowing what animations to play at the beginning of a battle, the player can recall any Slot ability at any time. The easiest way to recall an animation that costs next to no MP, and allows the player to use Joker's Death (7-7-7) and all other Slot abilities, is the item Echo Screen. Specifically, the animation of Echo Screen and Smoke Bomb, the former being more practical, bumps the index by 10h, which when done at the beginning of battle allows the use of every Slot ability, including 7-7-7.

Even if there's a way to manipulate and use 7-7-7's version of Joker's Death at any given moment, there are some battle formations that prevent 7-7-7, but not the 7-7-Bar version. 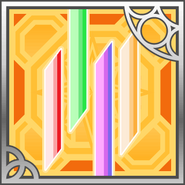